Scorpions, Hens and Chicks: the Cosmic Hesed of God

Luke 13:31-35
There is a story of an old man who used to meditate early in the morning under a big tree on the bank of the Ganges River. One morning, after he had finished his meditation, the old man opened his eyes and saw a scorpion floating helplessly in the water. 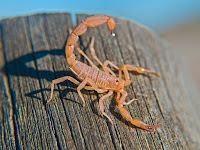 As the scorpion was washed closer to the tree, the old man quickly stretched himself out on one of the long roots that branched out into the river and reached out to rescue the drowning creature. As soon as he touched it, the scorpion stung him. Instinctively the man withdrew his hand. A minute later, after he had regained his balance, he stretched himself out again on the roots to save the scorpion. This time the scorpion stung him so badly with its poisonous tail that his hand became swollen and bloody and his face contorted with pain.
At that moment, a passerby saw the old man stretched out on the roots struggling with the scorpion and shouted: “Hey, stupid old man, what’s wrong with you? Only a fool would risk his life for the sake of an ugly, evil creature. Don’t you know you could kill yourself trying to save that ungrateful scorpion?”
The old man turned his head. Looking into the stranger’s eyes he said calmly, “My friend, just because it is the scorpion’s nature to sting, that does not change my nature to save.”
Just because it is his nature to sting, that doesn’t change my nature to save. Doesn't that sound to you a lot like Jesus?
The lament of Jesus in our gospel today sounds an awful lot to me like the lament within the old man’s statement. “Jerusalem, Jerusalem,” he cried out, and we can hear the sadness in his words, “….How often have I desired to gather your children together as a hen gathers her brood under her wings, and you did not want me!” (a literal translation of the Greek). 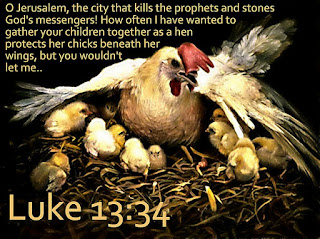 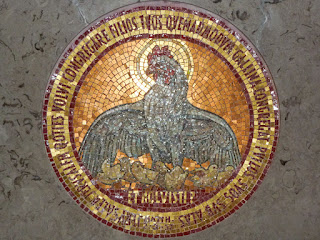 Posted by Wading Through Grace at 1:30 PM