Many Stories, One Voice

Luke 15:1-3, 11b-32
As we read the gospel this morning, you voiced the parts of the two brothers – the younger son, who went away for a time and then returned to the homestead, perhaps only seeking survival, but receiving grace far beyond his imagining;  and the elder son had stuck around and unfailingly persisted in trying to do the right thing, consistently receiving all that he needed all along, but never really appreciating that fact.
I wonder how reading both parts felt to you? Which voice felt most authentic to you – most like your own experience, most like the character you can relate to?

Most of us have probably heard this parable many times. Therefore, the word, “prodigal,” has become part of our lexicon, and it has come to mean something rather specific to us. So, when we hear someone referred to as a prodigal, or even refer to themselves as such, what do we think of? What assumptions do we make about a person who is a “prodigal”?
Very often, the prodigal is one who has turned away from and rejected familial relationships. The prodigal is one who seems to have moved the family system to a place of irrevocable brokenness. (You know the saying, “A mother is only as happy as her least happy child? It goes for the entire system.) We’ve each probably known someone like that at some time in our lives. Perhaps we’ve been that person.
The story of the Prodigal Son may strike some of us uncomfortably close to home, because there is some aspect of the story that we are living out today.  Someone is lost; someone is missing; someone, while still living, is as good as dead.
Sadly, for some who are locked into situations like this, hurts suffered have never healed and now feel beyond healing – a life has ended, and with it opportunity for reconciliation may be passed. Instead, a scar resides deep within.
Prodigals are created  when someone has “fallen from grace” through decisions made, alternative alliances forged, (like falling in with the wrong people), suffering failures of our own making, or abandoning the relationships and norms that surround them.
If you have ever been a part of a prodigal story, regardless of which character you have been, know that it is with sincere empathy for each of the characters here, that we approach this story today.
While it may be easy to place ourselves somewhere in the story, this parable does not stand alone, but is part of a larger narrative in which Jesus responds to those challenging him by telling three stories that center on the experiences of loss and grace.
The situation is this: the Pharisees and scribes were Kvetching about the social activities of Jesus. He has been spending time with, and even eating with tax collectors and sinners. (Imagine that!) He has been hanging out with outcasts and undesirables. (Oh, my!)
It might be really satisfying for us right now if Jesus just set the record straight and put them in their places.
Instead, (this being Jesus) he tells these three parables – stories in which it is unquestionably clear that God loves and behaves differently than we do, and that God values sinners more than we could ever imagine, (which is good news for all of us!).
As Jesus moves from parable to parable, story to story, he barely takes a breath. He begins with a woman who finds a lost coin – just one coin among many she may own – because of its importance to her, and when she finds it celebrates with great joy and wild abandon.
Then he tells about a celebration that goes on when one measly sheep out of an entire flock is found after wandering away and becoming lost.
And finally, he tells about this huge bash given in honor of the most unlikely of recipients: a kid that was not simply lost, hadn’t just wandered away, but has behaved in the most egregious and outrageous manner, demanding an early pay-out on his inheritance, and then abandoning his father and all that connects him to this place.
What makes this story so interesting and how over-the-top all of the characters behave. 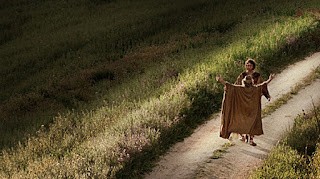 It’s all quite scandalous, really, but only the elder son in the story seems to know that. Of course, he has his own gripe, because not only has the father behaved shamefully weak and gullible, in his overzealous rush to welcome home his boy, the elder son has felt totally disrespected. 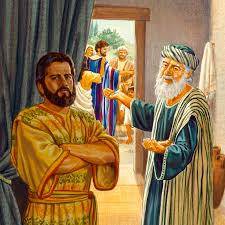 Here this brother of his so cruelly and uncaringly cut himself out of the family, yet is given the hero’s welcome, while here he stands, the polar opposite – faithful, dutiful, hard-working, loyal son – the son who has slaved and tried so hard to always do the right thing. He is flabbergasted to see his brother receive what it is he himself has always wanted – recognition, favor, the party!
This, my friends, is a story of extremes. The father’s over-the-top forgiveness and love for his sons is book-ended by their outrageous behavior.
The thing is, in our reading of this story, while the words and actions of one son may have resonated more than the words and actions of the other son today, many of us may have found ourselves in the shoes of both sons at one time or another in our lives.
The point that this parable makes is poignant for whatever your story might be. There is genius in that, because the truth is that God’s grace is every bit as scandalous and ridiculous as the picture we get of the father in our story. And it doesn’t matter which brother’s actions reflect our own, God’s love is big enough and God’s grace sufficient enough for us all.
The story speaks as much to our lives as it did to the lives of both Gentile and Jew, Pharisee and outcast, sinner and rule-follower, prodigal and elder-brother of Jesus’ day. And the point Jesus makes is just as timely for us today as it was for those for whom these stories were originally written. 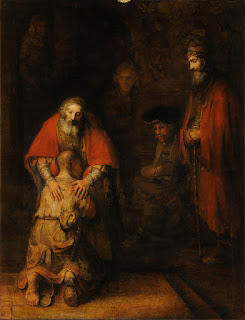 It boils down to this: in God’s economy, there is plenty of grace to go around, and God spreads it over each of us as we have need. It is God’s desire that none of the sheep who go astray be lost forever; that the coin that found its way into a corner somewhere is just as precious and necessary to God’s kingdom as any other coin in the purse; and that the gospel is for everybody – rule follower and prodigal alike.

That is indeed good news for all of us. For those of us who seemingly hit rock bottom before we realized that we were invited to the great feast, and sometimes still feel like we’re dangerously close to the bottom of the pit, God especially reaches out to you in love and forgiveness. God wants you to know that you are welcome and cherished, and you are, through the mercy of Jesus Christ, forgiven.
For those of us who have been around here for years, and for those who just started attending church or coming to the table yesterday, God’s grace embraces you equally; you belong here and are equally members of the Body of Christ. For those of us who struggle to get through each day and for those who really have ourselves all pulled together, God love and grace are poured out on you in sufficient quantities to for exactly the need you have. For those who can quote scripture chapter and verse and those who have difficulty distinguishing the Old Testament from the New, God knows your hearts in equal measure and has already surrounded you with God’s compassionate love. You belong to him.
The good news of the Gospel of Jesus Christ is that it is for everyone. All are invited to the table and in God’s perfect grace it is large enough for us all.
God’s love does not discriminate, it transforms. It doesn’t matter where you have come from or where you are today – in Jesus Christ, God’s grace covers you. The good news of God’s scandalous, ridiculous grace is for those who have always been the straight arrows and for those who have followed the crooked path. And since God’s love enfolds every cherished person, how can our welcome do any less?
God rejoices in the person God has created you to be. It doesn’t matter the color of your skin, the language you speak, or the country from which you or your ancestors derived, your gender, your age, or your sexuality. God’s love enfolds you.
As we read this parable, we acknowledge that we need to die daily to sin and rise to new life in Christ, which is the gift of our baptism. But, only when we are able to let go of our resentment, judgment of the other, bitterness and hatred may we learn what new life and new creation truly mean; it is the radical, scandalous, and ridiculous love of God and God’s eternal and unending grace that we receive through Jesus that will finally, when all is said and done, free us from our own lost paths and need for justification.

My brothers and sisters in Christ, prodigals all are we. May we live in gratitude that even in his final act from the cross, when he forgave another prodigal, the criminal beside him, Jesus showed us how unfathomably scandalous and huge is the grace of God. Praise be to God! Amen.

Posted by Wading Through Grace at 3:46 PM