Our grandson, Alex, will turn 10 this month. At our family Christmas gathering just a little over a week ago, a gift he received was wrapped in a very special way. Tearing through the paper that wrapped his gift, he found – another layer of wrapping paper. He tore through that layer of paper and revealed another. He tore through that one, and you can guess – there was yet another layer of wrap, and on and on it went through a dozen layers covering his new book. 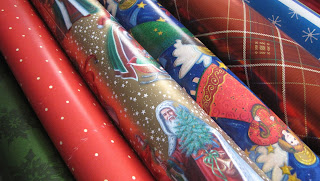 Alex is old enough to have had great fun with this, and to have been a great sport about it, never getting frustrated, only more excited as he made his way through each layer, until he reached the real gift.
The Gospel of Jesus Christ is a lot like that gift, with layer after layer of meaningful history and detail wrapped around the God’s greatest gift to us.
Today is the Twelfth Day of Christmas, the eve of the day we – and much of the Christian world celebrates as the Epiphany. Today we read of the coming of the magi, and God’s work in and through them. The Gospels reveal to us the various ways in which God is revealed or ways in which God reveals something essential through the real gift of Christmas, Jesus.
The magi represent yet one more layer of wrapping removed as we seek the meaning of the ongoing gift of Jesus to the world.
Contrary to popular and traditional images of them, the strange visitors from a foreign land were neither kings – magi were more like magicians or astrologers or even men who belonged to a priestly caste from the Eastern religion, Zoroastrianism – nor do we know for sure how many of them there were – the Church probably settled on the number three because three gifts are listed in the gospel, though many Orthodox denominations have twelve magi who came. 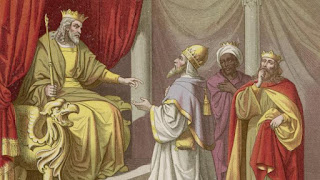 Thanks to the King James translation of the bible, the magi are often referred to as “wise men”.  What makes them “wise” however, isn’t their background or origins, but their obedience to the divine message given to them in a dream, not to return to Herod but to go home avoiding him – and to seek the child worthy of their homage. The Bible doesn’t name them – though again, tradition has filled in that detail and given them the names Caspar, Melchior, and Balthasar.
What we do know is that they were likely wealthy, were certainly Gentiles, they came a great distance from the eastern part of the continent, and they came because of astral events or signs they observed in the heavens. Finally, we know that they were compelled to follow those signs until they arrived in Bethlehem of Judea. There, asking around, they finally discover the Holy Family, and worship the Holy Child.
Jesus is that child, born into a dark, dangerous, and inhospitable world. Herod the Great was a vassal king of Rome. He did not come to power through a royal line of succession and could therefore be considered an unqualified or illegitimate king by those he was sent to rule over. He was therefore particularly sensitive and insecure in his ability to hold on to his power and became fearful when he heard a child born in Bethlehem was being identified as “king of the Jews”.
Of course, we know that it was not his intent to worship, but to murder Jesus. And we know that being unable to find him, he ordered the murder of the innocents – all those baby boys two years and under found to have been born in the region identified by the magi. In his insecurity, through his fear, Herod represents the evil and darkness that work to deny Jesus his rightful place and purpose.
But God will not be thwarted. God makes himself known through his divine Son, Jesus Christ. The magi know it. And we who believe in Jesus know it. And through this story we become aware that God’s love and salvation are sent not just to a select group of people, the Jews, but to the whole world.
God is there through the darkness and in the light.
And, God has made his love and mercy plain to us in the Holy Child, Jesus Christ, our Savior.
We still live in a dark, dangerous, and inhospitable world. We still live in a world where those in power are insecure and fearful of losing their power. We live in a world that still seeks to extinguish the true grace and hope of God, who broke the power of death and illumines the way to life and immortality through the Good News of Jesus Christ. But the Epiphany makes plain to us the power of God to thwart evil and grant us his goodness and mercy. 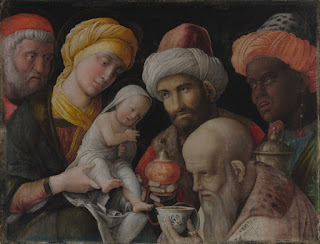 For God saves us and calls us to live a holy life; to discern the false claims of divinity and favor on any human being. Through layers of grace God will defeat those who seek to do evil to the innocent of the world and on those who believe in him. By shining the light of His glory, which leads the way to Jesus, God reveals his plan to save us, a plan centered in godly grace and love.
When we look upon Jesus, and when we come to know his words and deeds, God’s character is shown to us. Through the layers of his teaching, his example, and his cross, God’s character and plan for us are revealed. When we meditate upon his sacrificial death, and when his resurrection is revealed to us, Jesus uncovers God’s compassion and mercy to us.
In our relationship with Jesus, our Lord and our King, God is revealed through our own merciful deeds; in Christ-like love that shapes our words, our actions, our thoughts and our prayers, His love is known. Our devotion to Jesus is shown as we die to sin and serve as his compassionate hands and heart to the poor, the despised, the weak and the rejected people of the world.
God delivers hope to the hopeless in the light of eternal life given to those facing death, and to those persecuted, wounded, and murdered because of their religion, race, or identity, and those who stand for God’s forgiveness and mercy.
The Good News of Epiphany is that as God once revealed himself through the small child of Bethlehem and through the gifts offered him by the magi, God continues to reveal himself through the ongoing gifts he gives through Jesus. As we linger in the light of the star, let us renew our commitment to sharing this good news with the world.
Amen. 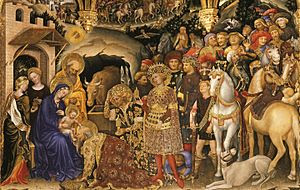 Posted by Wading Through Grace at 10:41 AM