Imagine that you and I are among the disciples who have been regularly meeting together and have even gotten to spend some time with the risen Jesus during the fifty days since Easter. How might we relate all that happened on that Pentecost morning? Perhaps something like this: spoken as a 1st century disciple
As we sat in the upper room on this 50th day, it’s been ten days since Jesus ascended to heaven, but before he left us, in the days between his resurrection and now, Jesus said and did some pretty radical things, just like he did when he walked with us before his crucifixion.
From the very first night, the day we discovered his tomb empty, Jesus has returned to visit us and explain things to us, and tell us how we will do the work of his kingdom when he’s not here anymore.
But from that first night, Jesus told us not to fear but to be at peace. He told us many times that he would not leave us bereft and alone but would send and advocate to lead us into the way of peace.
One night, soon after the empty tomb, a couple of the disciples were walking on the way to Emmaus and they met him on the road. They didn’t recognize him at first, he appeared to them as a stranger – but they told him all that had happened in Jerusalem. But that night, as he sat with them at dinner, suddenly, in the breaking of the bread, they knew with no doubt at all exactly who he was. He opened our hearts and minds to understanding the Scriptures that night, especially as they pointed to him as the Promised one of God.
Then, just like he had in the days before his death, he promised to send an advocate – the Holy Spirit - to equip us with gifts who would open us up like that, and would give us all that we needed to carry on his work, to tell everyone about who he was and why he came – what happened to him, and all that.
He told us that while we would never know the exact time when he will return and bring the kingdom to its fullness, until then, all the gifts we needed would be given and all he has told us will help do our work – the work he is giving to us.
This advocate would even give us the power to carry the truth of who he is throughout Judea, including, amazingly, that wretched, unholy place, Samaria, and finally to all the ends of the world. Jesus means for us to share with everyone, so that everyone has the opportunity to believe in him.
Who could ever believe these things if it were not Jesus himself who told us they would happen? Who could ever believe that eventually his followers would live on every continent throughout the world? But I am getting ahead of myself.
Because, as we sat in the upper room pondering all these things and wondering about what God would do next, or whether those opposed to us would break into that room and do to us what they had done to Jesus, maybe what we should have been afraid of instead was about to happen.

We didn’t know what to think at first as the wind started howling. This wasn’t like any wind we had ever experienced before. It wasn’t outside the building where we sat huddled, but in the very room in which we were gathered!
Things got crazy then, with fire first appearing and then separating into many tongues which rested on each person there, and suddenly, before they even knew what was happening, the eleven were speaking in many voices and languages! I can’t even begin to describe what a powerful experience that was! The truly amazing thing was, all the believers gathered around could clearly understand what each one was saying, - every word – every foreign tongue, even if not in their own tongue!
The noise was incredible!
The cacophony that was created by all this was so loud and so strange it startled the unbelievers, who could not understand what was happening and claimed we were crazy or drunk or both.
But we knew we weren’t. We were altered alright, changed for sure, but in the very best way possible, freed from our fear and our ignorance through this blessing of the Holy Spirit of God for the holy mission God would give us. And we would never be the same.
But the amazing, wondrous, miraculous things did not stop there. Peter, the same one who assumed would lead us despite making some of the biggest blunders, always sticking his foot in his mouth – well, he began to speak.
He, who had never preached before, began speaking with power and authority about the person of Jesus Christ, the Son of the living God, who was sent by God into the world but who they (the unbelievers) had crucified. He spoke powerfully and convincingly for hours!
Amazingly, by the time Peter was finished, all those unbelievers – about three thousand of them, repented, confessing Jesus as Lord, and they were baptized.

The church we know today doesn’t look much like the one that was birthed that day, especially as it appears in the Western world; there were no specially-built churches with steeples or organs or pianos or band set-ups; nor large buildings with auditorium seating, fancy lighting, and screens like some churches have.
There were no little baptismal fonts like what we have now, and no fancy altars and pulpits such as we have come to expect in so many of our worship spaces. There were no committees or vacation bible schools or Sunday School programs for that matter. No pot-luck dinners, fund raisers, or youth groups.
As Pastor Nadia Bolz-Weber writes, “At the so-called birth of the church there were no ushers handing the Parthians a bulletin.   The Medes didn’t have a bake sale after the service.   It can be hard to see any resemblance at all from how we started to what we have become.  …. unless we look at the people.  In which case there is honestly no difference whatsoever.
“See, we still have fear and isolation in the church. It’s called sectarianism.  So nothing’s changed there.  And those people who did the whole speaking in tongues thing …well, obviously they are the Pentecostals.
“And that long list of how many different nationalities showed up must have been added by the first UCC’er bragging about their multiculturalism.  Nothing’s changed there.
“Then there were those who witnessed this powerful act of God…this Pente-chaos and, in an attempt at intellectualizing it, all they said was “well what does this mean?” So, they were like, the first Lutherans.
“And the ones who said, “Those people are drunk” were perhaps some Evangelicals focused on the personal morality of others. So that’s not changed a whole lot.
“Then finally there’s the nice but completely naive guy who says “O my gosh, there’s no way they can be drunk…it’s only 9 o clock in the morning.”  So, there we have what we like to call the Methodists.
“Nothing’s changed much,” Bolz-Weber continues.
“People are people. There are the emotional ones, the judgmental one, the naïve ones, and of course the ones like myself, who insist on categorizing and naming everyone as though people can be reduced to a label.  Honestly. 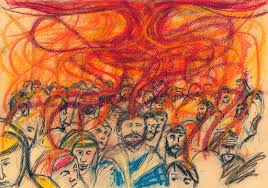 “So, there we all are even from the beginning.  Flawed, smug, confused, embarrassed and embarrassing…in other words the very people to whom God sends the spirit.”
I think Bolz-Weber has a point there. Just like that first Pentecost, God still surprises, shocks and amazes us by showing up, and never as we expect him to.
First, God doesn’t use perfect people to show us what godly love is like; that’s a good thing because if God needed perfect people to do this work that would rule a lot of us out, me chief among them.
Nor does God seem to care much if we are man or woman, straight, gay or queer, single or married, young or old, rich or poor, black, white, pink, yellow, brown, red, purple, polka dotted or striped. God just loves. That’s what God does, and that’s what God expects us to do.
God doesn’t care if we are perky or fussy, beautiful or just average, tall or short, skinny or generously proportioned. God loves us just the way we are and offers himself for our salvation, and then uses us to serve the whole world, sharing the good news of this astounding grace.
God doesn’t care if we are eloquent or totally trip over our tongues when we have to talk in front of people. God uses us anyway.
God doesn’t care if we get squeamish at the first sign of a paper-cut or whether we are battle-hardened, having accompanied others through the deepest wounds imaginable, through the Holy Spirit God gives us the gifts we need to be the embodiment of the hands and feet of Jesus – with hearts full of compassion and love.

God’s Holy Spirit is not stopped by closed doors – including the doors to our own hesitant and doubting hearts.
God apparently doesn’t care on whit whether we are rich or poor (although Jesus does caution us that what we treasure reveal where are hearts are focused).
God doesn’t really care if we’re liberal or conservative, centrist, libertarian, or green-party. We may struggle with this one, truth be told. But God doesn’t. As long as we unite in Christian love, service, care and compassion, and continue to call out evil, injustice, oppression and bigotry, God’s okay with whatever we want to call ourselves; because God knows our most fundamental identity is Child of God. God knows this because God made it so.
To help us with this, God sent Jesus that all might have life in his name, and then sent the Holy Spirit, that the life he gave might grow and share the good news of his mercy and grace.
The Holy Spirit’s job is huge – and so when she came, she came in whirlwind, and fire and powerful signs and wonders. Today we celebrate the enlivening, empowering, creative, faith-giving, unifying work of the Holy Spirit.
Where do you feel the Holy Spirit moving in your life? In this place? In the world?
We rejoice that Jesus did just what he said he would, by sending this advocate this force of the divine, to be the wind under our wings, the one who prays with and for us in sighs too deep for words, brings us to faith and then strengthens us in the Word.
And today we celebrate the Holy Spirit who stirs things up, because the mind of the Spirit is the will of God, willing us to that abundance of life God desires for those in this world to have. It’s sometimes a challenging reality, as the equanimity in God’s vision often upsets the apple cart, leads us into turbulence, and takes us to places we’d rather not go. This Holy Spirit sometimes consumes what was, in order to make room for what is to come. And that’s a good thing.
As you look around and see the Holy Spirit at work  in the world, or look inside and see her transforming you, and especially as we look at this church and see God’s presence and work through the Holy Spirit enlivening our work together, let us give praise for that fiery Spirit and blessed wind. Through God’s mercy an the work of the Spirit, we pray that this church would soar to places we never imagined possible, doing God’s holy work. Amen.
Posted by Wading Through Grace at 7:54 PM No comments: