Christ is risen, Alleluia!
He is risen indeed! Alleluia!
A well-known and often ignored piece of advice to pastors regarding children’s sermons is, “don’t ask questions.” You never know what you’ll get – you know the adage, “Children say the darnedest things?” Of course, there is also the saying that Jesus himself quoted, “Out of the mouths of infants and babes….”
Well, there is a pastor who asked this question in an Easter Sunday children’s sermon a few years ago: ‘What were Jesus’ first words to his disciples after he was raised from the dead?’ To be honest, he didn’t expect an answer. It was sort of a rhetorical question; but before he could give the answer from Gospel of this morning –a little girl waved her hand eagerly, excited to answer the question, so the pastor called on her. “I know what Jesus said,” she answered; “Tah dah!”
Well, today we do indeed celebrate the great “Tah dah!” of the church, for—
Christ has risen! Alleluia! He has risen indeed! Alleluia!
You know, what it is lacking in dignity, “Tah dah!” more than makes up in accuracy, as a reasonable response when presented with the wonderfully surprising, unprecedented, and miraculous resurrection of Jesus.
Tah dah!
This Easter Sunday, we celebrate with great joy the wonderful surprise of that day when Jesus was raised from death to life.
While the real first word the Risen Lord Jesus spoke was in fact a very ordinary greeting – in this extraordinary moment, “Tah dah!” would have seemed about right. 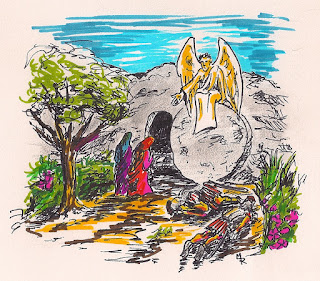 Imagine that you are one of the women who approached the tomb of Jesus that morning. The sabbath is over, so for those in and around Jerusalem that day, it was a regular workday.
The shopkeepers and merchants, the innkeepers and even the government officials and temple caretakeres were cleaning up and recovering from the Passover festival of the week before, even as the great multitude of visitors who had come to Jerusalem for the Passover departed to return to their homes.
It was back to business for many in Jerusalem that day.
It was not, however, business as usual for Mary Magdalene and the other Mary, mourning the death of Jesus. For them and for the other disciples, still reeling from the events of the week before, experiencing a communal sense of loss and failure, grief and shame, there was nothing ordinary about this day.
For these women, a visit to the tomb seemed in order.
It’s the same place where they had sat and watched as the dead body of Jesus was wrapped in linen and lain to rest just a couple of evenings ago. Aside from perhaps anointing the body, the women may simply have wanted to spend time where he rested—they  felt closer to him there.
You may have experienced the same kind of need, following loss.
Cemeteries are full of granite markers placed for our loved ones who have died, a place where we can go and remember them. Some of us have, in our home or in another special spot a place where we can go to remember and feel close to those we have lost.
But as the women approach the tomb, perhaps hoping to experience something of the essence of Jesus but expecting to experience nothing more than grief that day, two extraordinary things happen. On that first Easter morning, just as on the afternoon Jesus died, there is an earthquake. An earthquake!
What must they have thought? Did they remember the way the earth shook as Jesus died on the cross?
Then they saw an angel of the Lord descending from heaven, rolling back the stone from the entrance to the tomb, and they heard him speaking to them, saying, “Do not be afraid.”
These women, who perhaps had lost all hope, who are deep in mourning, who are the only two disciples brave enough to leave the upper room where the rest of the disciples were hiding out on this day, suddenly see an angel whose appearance is like blazing, blinding, white-hot lightening, from whom they are suddenly given words of hope, comfort, and reassurance. “Do not be afraid.”
Jesus is not here, the angel says, he has been raised from the dead just as he had promised he would be. Look in the tomb. See for yourselves.
So, the women take a look, and then, perhaps another, because indeed, “tah dah!” Jesus is not there. His body is gone. The tomb is empty.
The stone was rolled away not to let Jesus out but to let the women in; to let the women in so that they could see and witness for themselves the empty tomb.
Tah dah!
Jesus is risen! Alleluia! He is risen indeed! Alleluia!
Jesus has been raised from the dead, the angel tells them. 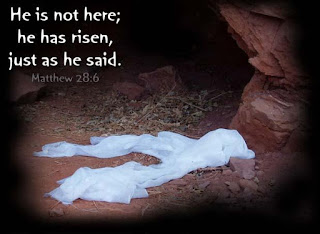 Jesus has risen from the dead just as he said he would be, just as God had planned, just as the Scriptures foretold it, because the truth is that neither death, nor hell, nor the tomb itself, can hold Jesus, the Son of God, the Messiah, who came to set his people free in the most astonishing, perfect way possible.
This is good news for us. For the fear and joy, the pain of illness, and broken relationships, the reality of our vulnerability and the frailty of life, the victorious resurrection of Jesus is nothing short of a life-giving, world-changing miracle.
The angel sends these women to be messengers themselves, carrying a holy “Tah dah!” for the disciples of Christ. “Quickly!” He says, “Quickly go!” Go tell the disciples this wonderful news. Tell the disciples that Jesus has been raised from the dead! Tell them that Jesus is still on earth and even now he’s on the way to Galilee where he will meet them!
So the women, with a mix of fear and joy, rush down the road to share this good news with the disciples.
They don’t understand what has happened and danger still surrounds them. But there is compelling good news to share, and the women can’t wait to share it.
Jesus has risen! Alleluia! He has risen indeed! Alleluia!
And then, Jesus meets the Marys. On the road. On the way.
“Tah dah!”
The women immediately know him and they throw themselves to the ground and they take hold of his feet and they worship him.
In the whole of our gospel today, I think this is my favorite verse. It is a “tah dah” moment, this moment of recognition, where Jesus appears to the women and well, what can they do but fall to the earth? What would we do?
And yet in that moment, Jesus’ response isn’t all that profound “Greetings!” he says.
The women are overcome with joy and wonder and awe and fear, and Jesus is so nonchalant, “Hi!” he greets them.
In their amazement, they have to touch him. They grab onto his feet. He has died, and yet here he is standing in front of them, and he is real! They can feel him!
Tah dah!
I know if I were one of those women, I wouldn’t ever want to let go. There, on the road, still holding onto him, they worship him. They acknowledge him as their Lord.
Jesus repeats the message of the angel – go tell my brothers to go to Galilee, and there they will see me.
Jesus has risen! Alleluia! He has risen indeed! Alleluia!
The good news for us is in the details of the story. Jesus lives so that we will never die. Jesus lives so that we can live fully now and later. Jesus lives so that, though our lives contain both sadness and joy, guilt and shame, fear and wonder, we can be assured that Jesus is with us in and through it all.
This resurrection is ongoing, it is a daily reality, because Jesus is still defeating the powers of evil and death, still bringing us new life, and will bring us ultimately to life everlasting; knowing this makes all the difference in the world. 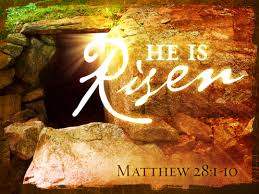 We still meet God on the road, in miraculous and every day instances of goodness and joy, as comfort in our struggles, as healing and hope and forgiveness and steadfast love. God leads us constantly to new life through the power of the resurrection of Jesus Christ.
Every time that we are up against a wall with no way out; or are suffering the betrayal of those we trusted; or confused about the ways of the world and the suffering we bear witness to, God shows us that these challenges, assaults and struggles are temporary. They will not defeat us. In every way that counts, Jesus is with us and in the power of the resurrection is holding us and making us strong.
The mystery and power of the resurrection of Christ is the great Tah dah! of God’s compassion poured out for the world. In the mystical power of his love, we can be assured that whatever the future brings, God will strengthen us and empower us. Whatever fear, pain, or challenge we face, God promises that we will not face it alone.
Rather, God promises that there is nothing stronger than God’s love, and God proves it through the resurrection of Jesus Christ. For, since Christ has risen from the grave, nothing can keep us from God’s love and power to save.
As Jesus met the women and as Jesus he will meet the disciples in Galilee, the risen Christ will meet us on all our journeys. The tomb is empty. Jesus reigns victorious over the grave. And so, it is with Easter joy and Easter confidence that we proclaim the great mystery of faith:

Christ is Risen! Alleluia!  He is Risen indeed! Alleluia!

Posted by Wading Through Grace at 2:41 PM No comments:

A Shocking Thing to Do

Posted by Wading Through Grace at 2:23 PM No comments:

Posted by Wading Through Grace at 3:27 PM No comments: