Romans 9:1-5
Paul has a problem. It’s a problem that causes him such enormous struggle and grief that he says that he would sacrifice his own salvation and place in God’s kingdom if it could make a difference. I think it is a problem many of us can probably identify with.
In the chapters of Paul’s letter to the Romans that precede chapters 9 – 11 which we enter today, Paul has been writing about the wonder of God’s love. He has been writing about the wonder of how God has opened up the gates of heaven first to the Jews and now to the Gentiles as well. He has expounded on the grace of God that frees humanity through the righteousness of Jesus Christ. He affirms, over and over that God’s faithfulness is revealed in God’s covenants, and that nothing can eradicate the promises of God.
Paul goes to great lengths (that’s another way to say that Paul can be wordy and his arguments rather circular) to assure the reader and hearers of this letter that salvation is God’s doing and is neither earned nor deserved by Gentile nor Jew. All have fallen short of the glory of God, and been judged guilty by God. All have been condemned to death by the utter failure of humanity to ever live in right relationship with God, to ever live in covenantal fidelity. That is, Paul says, we would be condemned, we would be overwhelmed by the power of death if it were not for God’s love, God’s faithfulness, and God’s determination for us.

The first eight chapters of this letter to the Romans contain nothing less than Paul’s powerful confession of the veracity of the gospel of Jesus Christ. He develops a strong argument for the power of the faith in which God engages us; he makes connections through scripture to God’s providence throughout all of history. Paul has set the stage in these chapters, by telling his story, by testifying how God has intervened in his own life – with a truth so powerful that he, Paul, a faithful Jew, was converted from his persecution of Christians and became a dedicated proclaimer of the gospel of Jesus Christ. Paul is convinced that all God’s promises of life and redemption are found in Christ and belong to the “providential hand of God.”
Just last week we heard the apostle’s powerful words of conviction regarding God’s absolute reign over the powers that might threaten us, a reign that is sealed through faith in Christ that is itself God’s doing. Paul writes, “For I am persuaded that neither death nor life, nor angels nor principalities nor powers, nor things present nor things to come, nor height nor depth, nor any other created thing, shall be able to separate us from the love of God which is in Jesus Christ, our Lord.” (8:38-39) Paul is convinced that God’s righteousness saves us, that God’s faithfulness redeems us from the grave, and that it is through God’s grace revealed in the life, death and resurrection of Jesus that salvation is won, and that believing in Christ, nothing ever can or will change that, nor take away from us the status of God’s beloved, redeemed, inheritors of the kingdom of God.
So what is Paul’s problem?
Paul enters some of the deepest waters of the New Testament here, as he contemplates the fate of the Jewish people. New Testament theologian Matt Skinner writes that at the time Paul wrote this epistle it was becoming more and more apparent that the Christian gospel would not receive a positive response from the majority of Jews who heard it.
With great compassion, Paul opens this ninth chapter of the letter with a heartfelt expression of anguish for his people; for the Jews. “I am speaking the truth in Christ,” he writes, “I am not lying; my conscience confirms it by the Holy Spirit. I have great sorrow and unceasing anguish in my heart.” Paul’s struggle arises out of the love and compassion that he bears for the Jewish people – the Israelites – the people of the covenant. Are they “people of the covenant” no more he wonders? What happens to them? If salvation is brought through faith in Christ but there is a fundamental rejection of the gospel, what then? These are not questions and problems only for Paul. World events both past and present detail the stereotypes we assign to the Jews which bear evidence that this problem and the questions it inspires persist.
Paul’s questions present a minefield. What does it mean to be “the chosen people” who reject God? What does it mean to fail to accept Christ as God’s new covenant? What does it mean for those who fail to receive Jesus as the Anointed One, the Savior, the Messiah? For, if the people of the first covenant, the one God made in antiquity with the Israelites – Paul intentionally uses that historic name as a reference - are not now saved, does that mean that God isn’t really faithful all the time? If God is not faithful to the promises made to the people of Israel, what does that mean for Jews, for Gentiles, for God?
Paul’s suffering is personal because these are his people he is thinking about. These are the people with whom and for whom he locates his own history and faith formation. Paul is thinking about his family, his friends, the people from synagogue that he’s known his whole life. In broader terms, Paul is thinking about all those Jews to whom he is connected through his birth and their shared history– these are the people he knows and identifies with. These are the people he loves. This is more than a struggle for Paul. This is a crisis for him.
Skinner writes, “Paul did not write Romans 9-11 as a “Christian” passing judgment on “Judaism,” as much as he wrote as a Jew trying, like the prophets of old, to make theological sense of the dynamics of disobedience and restoration among Abraham’s descendants. The question driving this section of Romans is “What’s God doing?” It’s not “What’s wrong with these unbelievers?” The situation threatened to ignite a theological crisis in Paul’s day, if it could be supposed that the gospel meant the expiration of God’s promises to those God had already chosen.” Could God have given up on the Jewish people?
It might be tempting to think that these issues don’t pertain to us. After all, we are Christians, far removed from Paul’s experience of conversion and the crisis in which he finds himself. We are believers in Jesus and in the gospel of grace and redemption. But these are important questions, and important passages to think about, because they wrestle with serious questions about God’s character and about the limit of God’s love and the steadfastness of God’s word. And there is that burning question – “What’s God doing?” 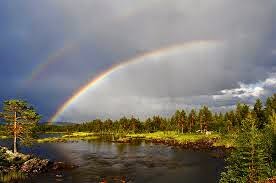 Friends, I submit to you that God’s history with Israel is our history too. What we encounter here is not an “us and them” question, but a “we” equation. The Jewish people’s rich theological heritage is part of our heritage. This is why it is important to consistently remind ourselves of the entire biblical witness – why we include Old Testament readings and psalms along with New Testament readings in worship each week. It is why our worship and liturgy is sprinkled throughout with references and biblical passages from the entire corpus of the scriptures both old and new. All of our worship and imagery, in fact, is rooted in the Old Testament – within the story of God’s relationship with the people of Israel as it was unfolding.
Further, to understand where Paul is coming from, consider this: how many of you know of someone who has struggled, or have struggled yourself because a loved one, a family member, an adult child perhaps, or even a friend has “fallen away” from the faith? How many of you may wonder about a friend who has never known Christ or rejects the gospel we proclaim? Where is their salvation? What will happen to them? If any of these questions resonate with you, then you might have a wee bit of understanding what it might have been like for Paul.
I can tell you that in my ministry I have been met by parents, husbands, wives and siblings who have suffered anguish like Paul’s when their loved one has died outside the bounds of the church and therefore, seemingly outside the bounds of God’s love and saving grace. I can tell you that I have often heard the despair of parents of adult children who have turned their backs on the church, or their faith. I have fielded questions about what happens to people who die without ever having known or accepted Christ. What, they want to know, what, we want to know, is God’s promise to them?
I cannot say with certainty that I can answer all of those questions – I do not know the mind of God. But I believe that God, who relentlessly pursues humanity, who expands the redeemed to include all of the creation, who saves even a lowly, insignificant creature like me – and you – and then feeds us endlessly from his own body and blood, this God is able to work for the good of all whom God loves. The same God who created the ordered cosmos out of chaos and man and woman out of dust and bone, can and will work in ways we cannot fathom or explain to bear good fruit for the new creation of the kingdom of God.


Paul S. Berge, Emeritus Professor of New Testament at Luther Seminary writes, “The Jewish people are not only the recipients of all that God has to give, but they are the people from whom the seed of promise has come as they bear the very gift of God to the nations: "And from them, according to the flesh, comes the Messiah, who is over all, God blessed forever. Amen" (9:5b). Paul has saved the greatest of God's promises to last. The identity of the Messiah is the greatest of God's gifts to Paul's kindred according to the flesh. This brings Paul to the only words that can express the focus of all that he has said in these introductory words--a doxology of praise to God--"God blessed forever. Amen!"

Posted by Wading Through Grace at 3:09 PM