Lost in Translation - Who's your king now?

John 18: 33-37 ~ Christ the King Sunday
A few years ago, there was an award-winning movie called “Lost in Translation.” The story is set in Japan, where an American actor is being filmed in a Japanese whiskey commercial. The actor does not speak or understand any Japanese, and the director speaks no English. One of the scenes goes like this:
On set to rehearse for the shoot of the advertisement, the director of the commercial speaks in Japanese to the interpreter:
“The translation is very important, okay?”
The interpreter responds, also in Japanese,
“Yes, of course. I understand.”
Now the director addresses his instructions to the actor, “Mr. Bob.” He looks at the actor intently and begins to give his creative direction clearly and concisely, though of course, again in Japanese:
“You are sitting quietly in your study. And then there is a bottle of Suntory whisky on top of the table. You understand, right? With wholehearted feeling, slowly, look at the camera, tenderly, and as if you are meeting old friends, say the words. As if you are Bogie in Casablanca, say, "Here's looking at you, kid,— Suntory time!”
Now it is the interpreter’s turn to translate this important direction to Bob. He turns to the actor and in English says, “He wants you to turn, look in camera. Okay?” End of translation.
Bob blinks and asks, “...Is that all he said?” End of scene.
This illustration reminds us that a great deal can be and often is, “lost in translation.” Our everyday lives are filled with moments lost in translation – moments when meaningful details are entirely overlooked; moments when interpretive reflection misses the real point of a conversation;         moments when we talk past each other; when your words and my interpretation don’t quite match up; moments when what you think is most important is the one part of the conversation I dismiss as irrelevant.
In relationships, the fallout of this phenomenon is played out all of the time. Being lost in translation means missing important information, making false assumptions about a person or a group of people; what is lost in translation is often the missing piece of a puzzle that has the ability to complete a picture accurately.
Sometimes these missing details are innocuous. Other times, missing the point creates situations which can totally change the trajectory of a relationship, or even of history itself.
Missing the point or not “getting” the full message can create misunderstandings. It can even lead to me giving you bad information. When vital pieces such as these are lost in translation, dysfunction and division between people result.
In the movie, in addition to the meaning and detail lost in the translation of the director’s words, the central character in the film, Bob, is lost in other ways. On a basic level, he is lost in a culture which is alien to him, where he does not speak the language, and does not understand simple social cues – he is, after all, an outsider in Japan; he is a stranger in a strange land.
Our relationship with God is also, it would seem, filled with instances of this same phenomenon. Lost in translation. Missing the boat.
The disciples of Jesus are often mystified and confused by details which have been lost in translation. The gospels are full of instances where Jesus is teaching about the meaning of God’s love, about who he is, and about how he is in fact the perfect expression of God’s mercy and justice.
But Jesus’ words and motives are often lost in translation not only by those who oppose him, but by those follow him as well.
Today is a day in the church year when we celebrate the reign of Christ, but the claim that Christ is King is one of those realities that can easily be lost in translation.
So it was for Pilate, and in many ways, so it is, still, for us, today.
Because the kingship of Jesus is nothing like anything else in our collective experience. God’s way of rule is as foreign to us as the Japanese language and culture were to “Mr. Bob”.
If we look at our gospel text for today, Jesus has been taken to the praetorium – the headquarters of the Roman military governor,        Pontius Pilate. There, Pilate tries to get to the bottom of this “Jesus problem.”
I can only imagine Pilate’s frustration. Jesus is accused of claiming royal status and power. In a world where status and power were carefully measured, delegated and protected, Pilate wants to get to the bottom of this claim of his.
So, Pilate tries getting a straight answer out of Jesus.
“Are you the King of the Jews?” All Pilate wants is a yes or no. A simple answer. Then he can go home for the day.
But as we know, Jesus’ response is not so simple – Jesus knows what no mortal can fully understand. Jesus cannot answer Pilate with a simple affirmation or denial.
What Jesus knows, what Pilate and we struggle to understand is that our human, culturally, politically and economically driven ideas and understanding of kingship do not come even close to God’s reality as revealed by the Reign of Jesus. 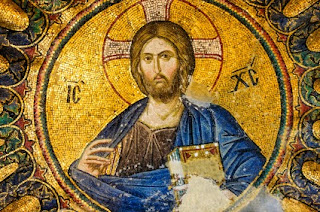 Earthly kingdoms have boundaries and earthly kings have limitations. Mortal kings live and die, they come and go. The borders of earthly kingdoms and provinces, of finite nations and their leadership are constantly shifting.
The reality of the kingdom of God and the kind of royalty defined by Jesus is simply lost in translation because the kingdom of God is limitless and Jesus’ reign is eternal.
Jesus answered Pilate, “You say that I am a king. For this I was born, and for this I came into the world, to testify to the truth.” And we collectively stand around and scratch our heads and wonder, is this a test?
Because that answer astounds and confuses us, even we who believe in Jesus. We know what is coming. We know about the passion and death of Jesus. And if Jesus is a king, our king, and we believe he is, then why doesn’t he just come out and say so? And if Jesus is truly king, and therefore in charge, why is the world in such a mess?
What is lost in translation between Pilate’s insistent question and ours, is the meaning and scope of kingship. Through his teaching and his ministry on earth, Jesus has been demonstrating the radical difference between the human concept of royal rank and the godly reality of God’s kingdom and rule.
While in the history of the world earthly kings have been people who have wielded great power, who have ruled over people and armies,       who have claimed ultimate allegiance and obedience from their subjects by sheer threat of force and violence, who have demonstrated giant-sized flaws to go along with their enormous egos, God does things differently. 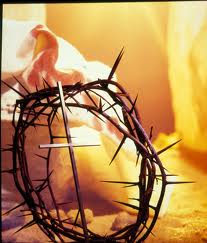 Our God does things like send his son to earth in a humble, human birth. Our God provides a cross for a throne, so that we can live in everlasting relationship with God in the resurrected life Jesus has won for us.
Jesus was born into this world, but is not of this world. He and Pilate speak different languages. To Pilate’s question, “So, you are a king?” Jesus responds, “You say that I am a king.” But placed side by side as each man speaks, this word – king - is lost in translation.
Because unlike the “king” of Pilate’s understanding, the king God has sent us comes with a different kind of power – a power stronger than any mortal’s – for Jesus has the ultimate power to liberate us sin and death.
And, unlike Pilate’s king, the greatest weapon in Jesus’ arsenal is love.
The Christ who claims our allegiance demands that we do as he does. When asked what is the greatest commandment, what does Jesus respond?
Jesus tells us that the greatest commandment of all is that you should love the LORD your God with all your heart and with all your soul and with all your strength and love your neighbor as yourself. And then Jesus says that if we love him, if we truly love him, we will keep his commandments.
We will follow his way.
We will seek the truth, that God is love, and we will cling to it and allow it to permeate our being and our behavior.
Micah 6:8 expresses God’s will and command for us beautifully:
“He has shown you, O Mortal, what is good.
And what does the LORD require of you?
To act justly,
and to love mercy,
and to walk humbly with our God.”
Here is God’s mandate for us, lived by Jesus himself, who put love, mercy and justice for those in distress above his own needs and security and indeed, even above his own life.
For those under the reign of Christ, these are words to live by.
My dear Jesus followers, we are reminded that love is not an affliction of the heart but is a way of living and being - love guides and is evident in our actions.
Jesus says, “I came to testify to the truth.” To testify is to act as a witness.  Jesus himself witnessed to the love of God for humankind. This is the truth Jesus himself demonstrated for us:
The same Jesus who ate with tax collectors and sinners asks for the same kind of compassion and love from us.
The same Jesus who drank at the well with a woman of questionable morals, who supped with and loved even – especially - the one he knew would betray him, asks us to testify to the truth – that what God desires from us is that we act justly, love mercy, and walk humbly, as Jesus did.
The same Jesus who, soon after his birth found himself an alien and refugee, calls for us to open our hearts to those who suffer, to show mercy to the vulnerable, the homeless.
The tragic events and the aftermath of the past couple of weeks call us more than ever to show ourselves to be Jesus followers   who are truth-tellers in a world spinning frighteningly out of control, knowing that there is but one king who rules our hearts, our lives and our love-driven actions.
There is but one king whose reign is absolute.


There is but one king who can calm our fears,
proclaim peace,
call for justice,
cry for mercy, and who loves us
from the depth of his being,
from the height of the cross.

This king, our king, the Christ who reigns over all requires that we demonstrate by our very lives that our kingdom is not of this world, thanks be to God!
Amen.

Posted by Wading Through Grace at 11:07 AM