Stones and Cotton Candy: Reverberations of Our Spirits


Waving pennants and flags; Shouts of acclamation; Babies crying; children laughing, and chasing each other, and waving. The scene is reminiscent of so many parades I know I have experienced in my life. 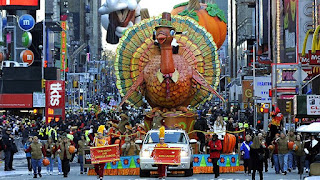 Like the annual Macy’s Thanksgiving Day Parade with its fabulous floats and balloons and a Santa Claus at the very end; the Rose Bowl Parade with so many beautiful displays constructed almost entirely from flowers; the famous ticker-tape parades hailing heroes from across the spectrum of recent history – astronauts and soldiers, presidents and prime ministers, explorers and pioneers, even victorious sports teams and Olympians.
All of those I have enjoyed from the comfort of my very own couch.
But nothing beats the experience of enjoying a parade in person, absorbing the excitement and feeling the reverberation of drumbeats and the clashing cymbals deep within your chest.
Scores of local and home-town parades like the one here in Easton and in other nearby communities just this past Thursday, dotted with familiar faces, regional school bands and local dignitaries provide this experience. 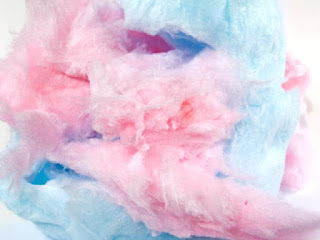 Who doesn’t love a good parade with the crowds, delightful good will, and junk food aplenty – hot dogs and cotton candy anyone? Parades take us out of our everyday, mundane existence and feed us with sight and sound and smell, and pleasure.
Such was the case the day that Jesus entered Jerusalem.
As Jesus entered the city, he was met with waving palms, and many more palms were strewn on the ground before him. People were so excited to see him that everyday folks even removed their cloaks and spread them upon the road over which he would pass.
They were honoring him by providing a carpet on which he could arrive in glory. As we recall the account of Jesus’ triumphal entry, perhaps we hear echoes of John the Baptist’s cry, “prepare the way of the Lord.”
In John’s gospel account of this same story, we hear the shouts of Hosanna as the crowd greets Jesus.
That’s why we heard those hosannas shouted and sung at the very beginning of our worship today - acclamations of hosanna to greet, praise and bless our Lord.
Let us not lose sight of the fact, however, that the original meaning of the word hosanna, from Hebrew and Aramaic sources was a plea for deliverance.
A shout of Hosanna was an appeal to the LORD who is righteous and good; a statement of confidence in God’s ability to save, to rescue, to be or to provide salvation from the grip of the oppressor, to save God’s people from the sting of evil, or the threat of death.
Palm Sunday is about more than a parade. It is about how Jesus lived out his mission to be that savior, to be that rescuer for which the people were crying out.
As Jesus entered the city that day, he sent his disciples into a nearby village before him to find a colt. As he rode along on the young donkey, people heard that he was coming and they stopped what they were doing, and ran to the gates of the city so that they could go before him to spread those branches and cloaks. 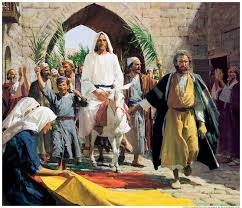 These are people under the oppressive control of the Roman Empire. They are a conquered people. Their lives are hard. There is no freedom in sight for them – unless the almighty God would have mercy on them and relieve them of their suffering.
Jesus is a person who has given them a picture of just that  kind of hope. Jesus has taught them about the love of God that is for all people, and has modeled for them of a life with God at its center.
Jesus has told them how much God loves them and Jesus has modeled for them a different kind of like – a life where the lowly are lifted up high and those that are high on themselves are put in their places, far behind and below the poor and the outcast, the oppressed and the suffering, the sick, the blind and the lame.
Jesus has embraced the tax collector and the sinner with forgiveness and love, thus leading them to transformed lives framed by the mercy and love of God.
The shouts and acclamations of that day represent a spontaneous, loud, and boisterous response to Jesus as well as a testimony and plea for liberation for those so long held in chains.
But the thunderous sounds coming from the crowds and the words of the disciples, “Blessed is the king who comes in the name of the Lord!” frighten and anger the powers that be. Some of the Pharisees are horrified by what they are seeing and hearing.
This Jesus is simply gaining too much power. Now the disciples are referring to Jesus as king! There can only be one king and he is appointed by Roman power! The Pharisees fear what the response of King Herod might be if he gets wind of this little demonstration.
They appeal to Jesus. “Teacher, tell your disciples to stop.”
It is at this point that Jesus speaks for the first time since entering the city. He answered them “I tell you, if these were silent, the stones would shout out.”
At the crux of the response is the truth that God will use what God will use for the purposes of God. Even stones. And the glory of God will surpass any power on earth to try to subdue it.
We are reminded of earlier scriptures using the imagery of stones. Satan tempts Jesus in the wilderness, telling him to turn stones into bread.
John the Baptist proclaimed, “Bring forth therefore fruits worthy of repentance, and begin not to say within yourselves, we have Abraham for our father: for I say unto you, That God is able of these stones to raise up children unto Abraham.” [Luke 3:8]
Stones are hard and immovable, but they are made up of atoms which are in constant motion. Just as God can take stones and move them to transform them into bread, or children and followers, God can move the very hardest of hearts.
God, whose Spirit is in constant motion, continues to work in all the stuck and hard places of the world.
Palm branches and shouts of “Hosanna” were reminders to the people that God could do miraculous and amazing things, like bring the dead to life and transform stones into disciples.
God could bring victory and vindication from the deep recesses of oppression—exactly what God’s people living in Jerusalem under Roman authority wanted.
When Jesus rode into Jerusalem, the crowds hoped and believed that the messiah was coming. But Jesus is a different kind of messiah than people were expecting.
They expected a mighty warrior, who would beat back the armies of Rome and send them packing. But then Jesus comes riding into town not on a mighty war horse, but on the colt of a donkey.
He comes not with flashing swords and sharpened spears, but with words of condemnation for the powers that oppress and words of mercy for the downtrodden.
The crown that is placed on his head will be one not of gold and jewels, but of thorns. His kingdom is marked by justice, not opulence.
When Jesus rode into Jerusalem that day, he wasn’t just staring down his professed and identified enemies. He was also coming to Jerusalem to disappoint his devotees in colossal fashion.
And, while they were perhaps preparing for an uprising, Jesus was preparing to take up his cross and die. The reality is that Jesus is coming to be exactly the kind of savior and rescuer that the people were proclaiming him to be with their cries of hosanna. They just didn’t know it.
In their short-sightedness, you could say that Jesus was a big disappointment to many in the crowds that day. How quickly they turned on him!
But for those who stayed, for those who made themselves vulnerable by continuing to follow him, the supper they shared at the Passover just a few days later made things a little clearer. Jesus came to serve, not to be served, and his followers would do the same.
Nourished by his body and blood, in a meal he instituted at that supper, Jesus promised he would remain with them and would give them all they needed – the forgiveness of sin and an identity as disciples of Christ. 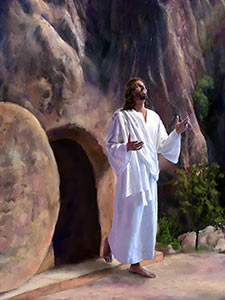 In the end, Jesus shows us that disappointment doesn’t have to have the last word. In fact, disappointment walked right out of a tomb and shattered the present powers of this world; through his resurrection Jesus would break the bonds of the oppressor, defeat the forces of evil, and take away the sting of death forever.
As the reverberations of the trumpets we hear this morning die away, as the notes of the organ music and choir fades, as we enter into this Holy Week, remember that no matter who you are or where you’ve been, Jesus has fully given his broken body and holy blood for each of us.
Jesus grants us redeemed life, so that we can live with him now, even as we await our own day of resurrection. Today, we receive the fullness, boldness, and graciousness of Jesus, gladly, humbly, and gratefully.
For Holy Week has begun, and Jesus will stop at nothing out of love for you, for me, and for the world.

Posted by Wading Through Grace at 11:11 AM