It is Good for Us to be Here!

Matthew 17:1-9 Transfiguration of Our Lord.
It is good for us to be here.
Peter’s words, spoken on the top of the mountain that day; they are our words today as well. It is good for us to be here.
To be honest, however, I’m not sure what Peter meant when he spoke those words. Was it good – for the church - that they be there because they had witnessed this transfiguration of Jesus – and three witnesses are better than one?
Was it good – for them - that they be there because it set the three of them, Peter, James and John apart from the other disciples and gave them special insight, even authority in the church? After all, aren’t these the same disciples who argued over which one was greater?
Or, was it good that they be there because now, Peter’s confession of Jesus’ divinity had been divinely, mystically affirmed?
The truth is, the disciples’ witness of the Transfiguration of Jesus wasn’t for their own benefit, or even for their “now,” rather, it was for what was to come. Jesus is preparing them for the time when he will no longer with them, following events that will confound, frighten and even paralyze them. They need to know, believe and trust, as do we, who Jesus is, and Jesus is preparing them to lead the church confidently, knowing exactly who he is.
It was not long before this, as the disciples and Jesus were hanging out in Caesarea Philippi, where they were surrounded by pagan temples and idols, that Jesus asked his disciples the question, “Who do you say I am?” Simon Peter had made the bold confession, “You are the Messiah, the Son of the living God.”
That had been a watershed moment; An exciting moment; an exhilarating moment. And Peter had been rewarded by Jesus’ confirmation that this was not only true but that God himself had blessed Simon Peter, with this knowledge. This simple fisherman-turned-disciple, who would now be simply called, ‘Peter.’
And yet, in the days that had followed, Peter’s confession, the high exhilaration of knowing that they were in the presence of the Messiah, had given way to frustration and devastation, confusion and darkness as Jesus began making predictions of his coming passion and death. Peter had been so disturbed by Jesus’ predictions that he had tried to shush Jesus, earning himself a harsh rebuke from Our Lord.
And now, six days later, six being the number considered necessary to prepare for a holy event in Israel, when Jesus leads these three disciples up the mountain. And there they witness just such a holy event when Jesus is transfigured before them. The divine confirmation and full knowledge of Jesus’ deity is made complete.
What happened on that mountain was not a simple visual transformation, where Jesus’ appearance was altered or morphed into something else. We are very familiar with that kind of transformation thanks to the assistance of computer-generated imaging so popular in the entertainment world these days. And Jesus didn’t turn into something or someone else and then turn back to himself. 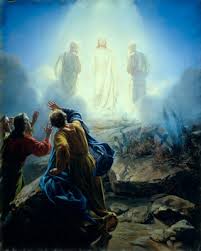 Posted by Wading Through Grace at 8:01 PM