Throughout the Bible, from the very first word to the very last word there is one, incredible theme which is stated, alluded to, illustrated or pointing towards…and that is God’s redemption of all creation and all people is God’s burning desire and motivation.  And there are points throughout the Bible where the poignancy of this redemption story is more obvious or concentrated.
The story of Noah and the Flood is one of those places.
In the Old Testament, or Hebrew Bible God established a pattern of initiating covenants — Divine promises to God’s people.  Each covenant is a little different, and each shows us important and transformational sides of the God of all life.
As we journey through Lent together this year, our first reading each Sunday includes one of five Covenants of God given in the Old Testament.  I thought it would be a good opportunity to examine these ancient promises of God and see what they have to do with us today.
First we consider the question, “what is a covenant?” We might use words like promise, agreement, contract, or oath, to describe what that word means – but some of these don’t quite convey the true character of covenants, especially when God is involved.

When I was a kid, I was fascinated with the concept of blood oaths. I read about them in books, and even saw people doing them in movies. It’s how you became blood sisters or brothers. Becoming blood sibling was to form a special bond or relationship of trust. You knew this person with which you shared the oath was someone who would keep your secrets. A promise made between you would be sacred, and a blood sister or brother would forever be a loyal friend to you. You would have each other’s back, through thick or thin.

The process for forming such a bond usually entailed a ritual that involved each person cutting a finger or hand until it bled and then both parties shaking hands or binding together their wounded fingers. The idea was that with the co-mingling of blood, the two participants were now inseparably bound together. (This was, of course, before the days of HIV and AIDS, and hand sanitizers, and the bodily fluid precautions that are now part of our everyday existence. So, Friends, do not try this idea out at home.)

The blood oath in the stories of my youth made a relationship sacred, for surely, nothing could break the bond true blood siblings. It signified that the promise being made was real and could be trusted.

Our reading from Genesis this morning tells the story of the first covenant God strikes with humankind. The Noahic Covenant, as it is known, follows what we know of as the Great Flood – the flood to end all floods.  This world annihilating flood forces us to wrap our minds around the action of God that destroyed most of humanity, a Divine impulse which attempted to drown out evil and injustice in our world.

If we go back a few chapters in Genesis, we discover the cause for the flood. In the beginning, God had created the earth, populated it with people and creatures of all kinds, and called it good. What God created was beautiful and bountiful and balanced. It didn’t take long however before that changed.

First, there was the tragic fall from grace through the introduction of sin in the Garden of Eden. Then, within humanity’s second generation, brother struck out against brother, introducing murder into God’s creation. And so it went, until by chapter 6 of Genesis, humanity had trespassed across every boundary that God had established in the beginning for the good of all creation.

The ensuing violence increasingly corrupted God’s “very good” creation, sending it into a downward spiral of death and destruction and chaos, like the primordial chaos from which God had first created it. Finally, we read in chapter 6, “The Lord saw that the wickedness of humankind was great in the earth, and that every inclination of their hearts was only evil continually” (Gen. 6:5). Wow. Let that soak in for a moment.
“Every inclination of their hearts…” every inclination,
“…only evil”.
Continually.

Those words leave no doubt. How tragic and heartbreaking that the good order God created into the world was so destroyed by the workings of humankind. 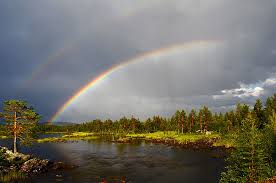 Then comes the verdict: “And the Lord was sorry that he had made humankind on the earth, and it grieved him to his heart” (Gen. 6:6).

After the flood, t’s easy to picture God, with head in hands, trying to make sense of all that had just happened.  In this reflection, or maybe even regret, God turns to Noah with a promise.
Never again will God use annihilation to solve a problem, never again will the creation be destroyed at God’s hands.  God will remember Noah and all the animals.  This remembering that God says over and over God will do, is not because God is feeling a little absent minded, rather God is turning with compassion towards Noah and all of the creation, just like the “do this in remembrance of me” that beckons us to the communion table. Remembering is a loving turn towards another.
This covenant between God, Noah and all of the creation is a promise.  Unlike most covenant, unlike the blood oath, where both parties give up something, promise something, nothing is asked of humanity, nothing is demanded; all is being offered.

In this covenant, God is not expecting perfection, which was possibly the expectation before the flood.  No, God has been transformed through the flood and the healing and now God commits to the future of less than perfect world. God will move forward with a wild and free creation and a wild and free humanity, God will remember us. 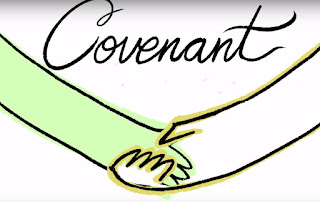 There is such healing power in turning from violence, turning from score keeping and who is right and wrong and welcoming another with warmth, compassion, and maybe a cup of coffee.  Sociologists may label this non-complementary behavior, but we, the body of Christ on earth know it as grace.  The undeserved, unwarranted love of God lavished upon us.
The same God who holds the power of destruction turned towards us, laid down his bow and cast it up to the heavens.  And every time that rainbow arches over the earth, God remembers God’s promise of mercy.
The story of God’s rainbow covenant was recorded by the people of Israel while they were in exile from their homeland. Their world had been destroyed. They had seen the demise of their secure government. They had suffered chaos and upheaval as religious structures and practices dissolved. This story served to remind them of their relationship with God; and the assurance of their bond with a compassionate and merciful God brought renewal and hope.

We might think of the ancient world’s slide into its own self-destructive ways. We might look around at our world today and wonder how much has changed. The recent past is full of the evidence of chaos that still exists in our world, and we might wonder if God is still heartbroken, still sad, still sorry for granting us life. Yet, in spite of the overwhelming presence of sin, chaos and struggle, God’s covenant abides.

In our generation chaos on the world stage has included World Wars, Holocaust, Nuclear warfare, genocide, famine and poverty. Ecological and natural disasters seem more commonplace than ever, with each season breaking records for the heating of the earth and oceans, historic storms, rising seas, and extinction or near-extinction of a range of creatures from the honeybee to sea animals feel the crushing weight of humankind’s footprint.

Gross inequity of the distribution of resources and wealth among the world’s many people includes a widening gap between the rich and the poor.

Our individual chaos results in relationships broken by death, divorce, illness of mind or body, addiction, and myriad abuses between people.

Communally, the destructiveness of racism, xenophobia, bigotry, sexism, intolerance and self-serving disregard for the plight of the other reveals our resistance to God’s ways and drives God’s creatures further and further apart. And still, God keeps God’s promise, a promise that is extended through the cross of Christ. 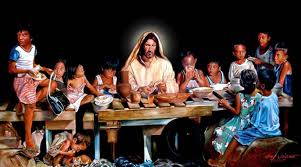 In Jesus, God responds with a blood oath of sorts, but it is a one-sided promise. We hear of it every time we gather around the table and witness the deep abiding love of God broken and poured out for us in bread, and in wine. “After supper,” we hear, “Jesus took the cup, he gave thanks and he gave it for all to drink saying, ‘this cup is the new covenant in my blood, shed for you and for all people for the forgiveness of sin.”

God responds with love and forgiveness in the midst of life’s chaos. In covenantal love, God reaches out to us despite the misery we bring upon ourselves, and in the midst of the chaos the world inflicts upon us.

Hearing the story of God’s first covenant with the People of Israel on the first Sunday of Lent, we begin our walk with Jesus toward Jerusalem, understanding in a deeper, fuller way, the God who sent him, the God whom he served.


The rainbow bending over Noah’s ark with its doors wide open and spilling out pairs of animals into a new world is an image that reminds us not only do we remember God’s turn towards us, but God too remembers us, responds to our brokenness and rebellion with grace and mercy, and grants us a covenant, so the cycle of violence, destruction and sin might be broken.
In this covenant the whole earth is remembered, the whole earth is restored.
May we now strive to live as people of this covenant gift.  Amen!

Posted by Wading Through Grace at 10:45 AM