Luke 1:26-38 – The Annunciation, 2019
Surprises can be good or bad and you may enter the land of unexpected consequences if you are the one delivering a surprise.
Knowing your victim – I mean, the honored recipient of your surprise – and all the possible detours and deviations that may arise when pulling off a surprise, and then preparing for them is really important.
Take, for instance, these surprises that were prepared for me the year I turned 50:
The first happened in Connecticut, where my parents and brother lived, and where I had gone to celebrate Mother’s Day with my mom. My birthday is just a couple of weeks later, in May. 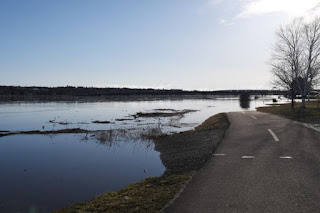 The ruse they had carried out was for me to visit my brother’s house, about 30 minutes or so from my parents’ while the party planners went to work at my parents’ house. What nobody expected was that a day’s worth of heavy rains would cause the tributaries of the Connecticut River that wound their way between those two places to rise so much during the day, that many of the roads I needed to take were flooded and closed.
When I was finally able to find a clear way back to my parents’ place well over an hour after I left my brother’s, I discovered a group of old friends and family who had all been waiting all evening for my arrival, poised and ready to shout “surprise” only to have themselves be surprised by the lengthy and unexpected delay. All was well, however and we were all “gotten” by the surprises that had played themselves out that night.
Then, the actual weekend of my birthday, our oldest son, Bill, conspired to get me out of the house by taking me out to lunch so Jim and friends could prepare. Bill lived in Smyrna, Delaware, about 45 minutes from our home and just down the road from a really great gardening center I didn’t get to visit very often.
My birthday is in May, and gardening is one of my favorite things to do, so after lunch I thought this would be the perfect opportunity to go shopping for flowers. I took my time, browsing through the flowers, the shrubs, the trees, the vegetable plants, the hanging baskets, the yard ornaments – until finally my cell phone rang.
“Where are you?” my husband asked me. “Think you’ll be coming home soon?” Then he covered his tracks by asking me where we kept something. 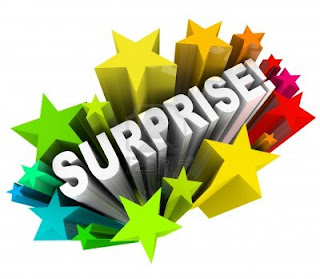 So, we chatted and then I finished up my shopping, filling my mini-van with geraniums, perennials and a few other annuals. Then I made the leisurely drive home, still totally in the dark about what was in store for me. When I got to our house, I was greeted by friends and family who had been waiting for a very long time for my arrival!
In today’s Gospel, Mary receives an infinitely more astonishing surprise. The angel of the Lord appears out of nowhere. Gabriel might as well have shouted “Surprise!” at the unsuspecting girl.
When he first comes to her, “shock” doesn’t even begin to describe Mary’s reaction. First there is this grand intrusion into her life, but the words Gabriel speaks confuse, confound, and trouble her: “Greetings, favored one! The Lord is with you.”
Greetings, favored one?  Mary may be young, but she has no illusions about who she is. She is a person of no account in the culture in which she lives. She is young, and though she is engaged to be married, she is probably only between 12 and 14 years old, the usual age for betrothal in her world.
Typically, after such a match was made, legally binding her to Joseph, she would continue to live in her parents’ home for about a year. Once she reached child-bearing age, she would go to live with her husband.
Further, we know that she comes from a small, po’-dunk town, for that is what Nazareth was in the Ancient Near East. The equivalent of “the wrong side of the tracks.”
So, in case you’re keeping track, in a nut-shell, in Mary’s world, she has these strikes against her – she’s female, she’s poor, she’s from the wrong side of the tracks, and she’s barely more than a child herself. You can’t get much more “lowly” than that. 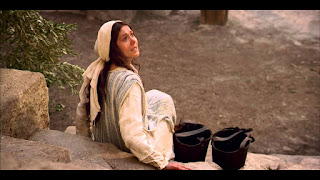 Yet, Mary’s story is surrounded by and enclosed in the surprising, and the impossible story of God’s astonishing, amazing, saving advent into the world.
We might be surprised at the Lord’s choice of mother for the Messiah, but God knew what he was doing.
There is an adage I’ve heard, and you probably have too, especially as it is applied to trial lawyers headed to court. The adage is this: do not ask a question you do not already know the answer to.
“Greetings, favored one! The Lord is with you.”
What follows Gabriel’s greeting is not so much a question as it is an astonishing announcement: that God has chosen Mary to conceive and bear the child, Jesus, who will reign over an everlasting kingdom.
Could Mary have refused God’s desire for her? Perhaps. But God knew Mary as God knows each of us, and God called this young, powerless woman for this role in transforming the world. Throughout the Scriptures, God has often surprised those through whom God has chosen to work, allowing and causing the most impossible of events to occur through them. By the same token, God has called and used the most unlikely characters to do the impossible, transforming them and the world through them. 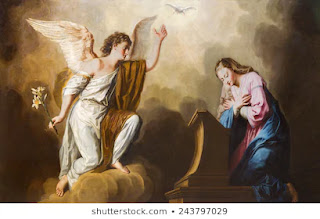 Posted by Wading Through Grace at 5:47 AM