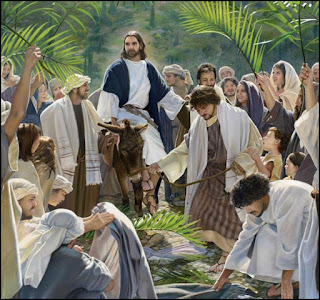 I recently read this Palm Sunday scene being referred to as the “glittering sadness.” Isn’t that a perfect description? For even as we imagine the jubilation of the crowds, we cannot help visualizing the reality of the cross: The cross upon which Jesus dies, for us; the cross from which his body is taken for entombment; the death from which he rises again, in glorious victory over evil, sin, and yes, even death.
The people in the crowd didn’t get it. They didn’t understand who Jesus truly was or what he would do for us.
The Pharisees and Caiaphas feared his influence and misunderstood him. The merchants and moneychangers at the temple, and those who came to worship there didn’t get what his beef was. Even his disciples didn’t fully understand who Jesus was and how his death fit into the promises of God until after his death and resurrection.
Jesus is the emissary and embodiment of God’s love for the world: the understanding and the misunderstanding, the faithful and the unfaithful, the repentant and the unrepentant. Jesus is mercy for the believer and the unbeliever, the ones who greet him as “Son of David” and “Messiah” and the ones who taunt him as he hangs upon the cross.
The glittering irony is that Jesus came to be love and in love, he died for the sake of all of us. In Jesus, God comes to us to be with us and for us through whatever we suffer or experience – illness, brokenness, pandemic, fear, loneliness – all of it.
He comes to us and bears with us in mercy and love beyond our imagining or understanding, shattering our expectations and assuring us of life and love everlasting. May this reality be our comfort and the force that accompanies us through this Holy Week and all the way to Easter. Amen.

Posted by Wading Through Grace at 3:49 PM