Like so many of you early this week, my plans, my schedule and my life were disrupted by news of the oncoming storm. Some of you had to cancel or postpone appointments. Some of you had to rearrange the timing of travel, shopping or other plans. A few of you had to arrange for child care or figure out what to do with your suddenly homebound children as one snow day turned into two, and then three, and so on.
I have to admit that this snowstorm caught me a bit by surprise. It wasn’t until Monday morning that I even knew it was brewing. By then the more I heard, the more out of whack my week became. My daughter Victoria, who is living in Florida while on internship there, had been visiting the Holy Land with a group from seminary for the past two weeks. By prearranged plan, she would fly into Dulles Airport on Tuesday evening for a brief stay in the area before flying back to Florida early Friday morning. 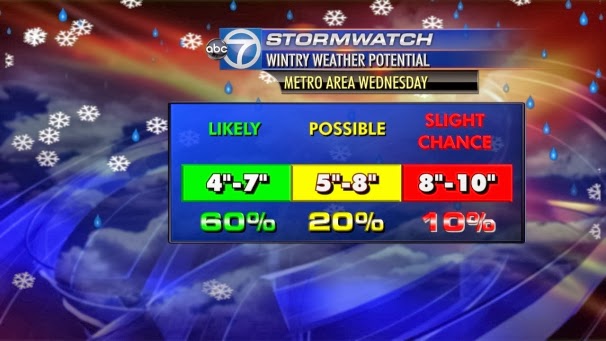 Suddenly I realized I would be doing an awful lot of driving through what was predicted to be the worst part of a storm that was to affect the entire region of my travel. What to do? I finally decided to reserve a hotel room for the late afternoon, as close to the airport as possible. I quickly located a very reasonable hotel about a mile from the airport (as the crow flies – something they don’t exactly make clear in the information online).
But as I listened to more forecasts, I became concerned about the timing of even this travel plan and decided that getting down to Virginia as early as possible would be the wisest course. I could just hang out and work in a coffee shop until it was time to check into my hotel.
I would be gone overnight, but wasn’t sure how things would play out. What if her flight was diverted? What if roads were so bad they were closed? What if one night turned into two? Well, I was never a Boy Scout, or a Girl Scout, for that matter, but I do live by the motto, “be prepared”. So I packed enough clothing for two nights, threw in a few extra warm pieces and a couple of coats and a spare pair of boots since I was sure my Florida-bound girl wouldn’t be prepared for the sub-zero wind chills being predicted. 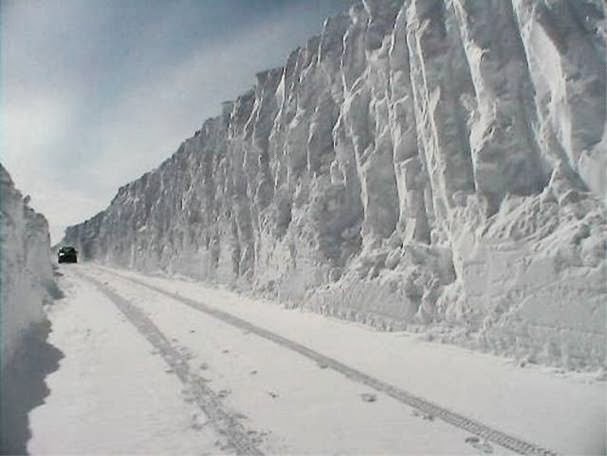 I had food to prepare in our room in case we were stuck in the hotel for a day or two. I loaded my briefcase with my computer, extra work and books to keep myself busy; I packed my knitting in case I had some “down time”; I packed my iPad in case there was other stuff I needed to do. I was ready to go! It was only a little awkward having to haul a briefcase, a suitcase, a tote bag and a grocery bag through blowing snow when I finally checked into the hotel.
That’s so typical of me. I like to be prepared. In fact, I need to feel prepared for every contingency – I’m just wired that way. It’s not a bad attribute, really. Except that it makes it awfully hard to be spontaneous. It makes it challenging to let go of the control I think all this preparation gives me, and it can be a stumbling block in answering God’s call in my life.
I guess that’s why I’m struck by this gospel. I’m struck by this word that appears twice in this passage – immediately. When Jesus calls to these men who would be disciples, they respond immediately. When Jesus is walking by the Sea of Galilee and sees Peter and Andrew, brothers who earn their living through fishing in the sea, and he bids them to follow him, immediately they lay down the tools of their trade, and they follow him. Likewise, with two more brothers, James and John, also fishermen sitting with their father in a boat and mending their nets, Jesus calls to them and immediately they lay down their nets and the text makes it clear that they leave not only the work they know and are familiar with, but also their father Zebedee, and they follow Jesus as well. And I have to wonder, what made them do it? What is it that they saw in Jesus or what stirring of the spirit did they feel at his words? 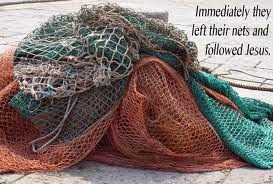 Had they already heard Jesus preaching and his call to repentance? Did they know Jesus personally? Had they already become friends? We don’t know the answer to any of these questions. But I suspect these fishermen of Galilee were simply ordinary folks doing their ordinary work on an ordinary day when Jesus walked by. He called them and they were spontaneous in their response. It was immediate. They put down what they were doing and they followed him.
Jesus had made his home in Capernaum, a place where most people earned their living either fishing or farming. Capernaum is referred to as the “Galilee of the Gentiles.” It didn’t have a large Jewish presence. It had been conquered by Rome and was ruled by a puppet king who was known for his cruelty, especially toward anyone who he perceived as threatening his authority or claim to power. It was he, Herod Antipas who had John the Baptist imprisoned and later, beheaded. Yet here it was that Jesus, the Son of God, the Anointed One, had chosen to pitch his tent - among a Gentile population of people who lived on the margins; with people who were not powerful; with ordinary people who scraped together a living doing hard, dangerous work, dependent as much on the vagaries of weather and good fortune as on the sweat of their brows.
And it was here that Jesus began to proclaim, “Repent, for the kingdom of heaven has come near.” Nerdy Greek pointer for the morning – this statement from Jesus is full of import for disciples then and now. Because the verb tense that Jesus uses is indicative of how God is at work.
While the kingdom of heaven, God’s rule, has come near, according to Jesus, it is not fully here. The perfect tense describes action that was begun at a particular time in the past, the effect of which is ongoing or continuing to unfold in the present, and will culminate when it reaches its conclusion at some yet unknown time in the future. Use of this tense here indicates that the kingdom of heaven, inaugurated with the dawning of the great light of Jesus when he came into the world, is not yet complete.
And so here in the cradle of our Lord’s ministry, discipleship is born as two sets of brothers are invited to follow Jesus. It is from here that Jesus not only begins his ministry, but calls his first disciples into kingdom work. They are called not just to follow Jesus, but to repent - turn away from all that is familiar and to follow Jesus, to work with him in this building up of the kingdom.
I wonder if they had any idea how hard the work would be and how large the mission field. I wonder if they knew how challenging the call would be, I wonder if they knew how dangerous it would become.
I wonder if they had any understanding of how this call would turn their lives upside down and inside out, how the message would become their lifeboat, how Jesus would change their lives, their understanding of themselves and the world around them, how it would call them to new relationships, to travel untrodden paths, would, in fact, take them to places they never imagined, doing ministry they never dreamed of. All we know is that Jesus called to them, and they came. Without hesitation, preparation, without a fancy seminary education, without making arrangements to take care of their homes and families, they went. Immediately.
They didn’t form a committee to determine how best to travel, or ask how they might afford to follow, they went. Without asking Jesus a lot of questions they went. Without asking what discipleship consisted of, they went. And God gave them the tools they needed to go.
Jesus calls disciples to a new way of life. It is a life that causes us to change direction, a life in which God’s love, grace and mercy are extended to the marginalized. It is a life that takes us out of our established patterns of behavior and into relationships that are guided by an unparalleled ethic of love and forgiveness.
God knows that people like me get really caught up in thinking we are control and therefore need to be well prepared for every contingency. God calls us anyway, and uses our gifts for God’s good purpose. God knows how attached we are to our safety nets, and God calls us anyway. Jesus knows how hard this kingdom work can be, knows how far out of our comfort zones it sometimes calls us, understands the sacrifice it sometimes requires. And Jesus calls us and equips us anyway.
Jesus chose to live among common people. Jesus called and still calls disciples right smack dab in the middle of the ordinariness of their days and Jesus called them to do extraordinary things. And in so doing, Jesus transforms these ordinary, common people like you and like me in discipleship that gives new meaning, satisfaction and purpose to our lives, and builds on the kingdom work for the sake of our God.
While John the Baptist may have been the forerunner of God’s light come to brighten the darkness and transform it into a world of light and hope, but it is Jesus who is the embodiment of that grace, and mercy, and transformational good news that rests on each of us. And God calls us to be disciples, to witness to the light of Christ in the world. 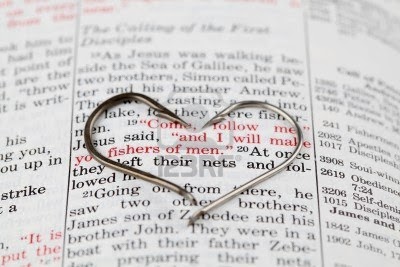 Jesus calls disciples to be witnesses of his mighty works of love, healing, forgiveness and redemption. We are disciples who witness not only in word but also in deed. We are disciples when we minister to the marginalized, the isolated, the lonely, the hungry, the imprisoned. We are disciples when we serve as bearers of God’s compassion and forgiveness. We are disciples when we, as individuals and as the body of Christ active in community, engage in the kingdom work as well, without reservation, freely and fully giving of our own transformed lives to share with others the love of God revealed in the life, death and resurrection of the anointed one, Jesus Christ, our Lord.
I would like to end with a prayer that is commonly used in the Vespers Service, a daily prayer offering at the end of the day. Let us pray.
O God, you have called your servants to ventures of which we cannot see the ending, by paths as yet untrodden, through perils unknown. Give us faith to go out with good courage, not knowing where we go, but only that your hand is leading us and your love supporting us; through Jesus Christ our Lord. Amen.

Posted by Wading Through Grace at 4:28 PM