What's In That Water, Anyway?

John 4:5-42 ~ Samaritan Woman at the Well ~
Last week in our gospel reading we encountered Nicodemus, a Pharisee who came to Jesus under the cover of the darkness of night, to ask him questions, stirred by Jesus’ teachings. Nicodemus was curious, but he was also afraid. Otherwise, why would he come in secret to see the Lord, and then keep secret the good news that he heard from Jesus?
Today we read of Jesus’ encounter with the Samaritan woman at the well. Comparing the two stories, we notice quite a few contrasts. One of the first things that we notice is that this meeting at the well occurs in the bright light of the noon day sun. And, details about this woman stand in stark contrast to Nicodemus.
·         Nicodemus was a figure of authority and whose position garnered respect. The woman is a Samaritan – of a race of people considered unclean and untouchable by Jewish law and standards; so despised that most Jews would go out of their way to avoid encountering them on their journeys, and would never have wanted one to touch the cup they were to use.
·         She is a woman – already a person of little account or worth in her culture, because of her gender.
·         Unlike Nicodemus, she is given no name in the story. She is unknown, adding to the sense that she is a person of little regard.
·         She has come to the well in the center of town to draw water for herself. We can safely assume that she is either a servant or a person of no wealth or standing of her own. In fact, one reason she may have been at the well at that time of the day was that she was an outcast among her own. Most women drawing water at the well would congregate there in groups early in the morning or in the evening – they would not come alone, in the hottest part of the day, to draw water.
·         As Jesus reveals, she has had five husbands and is now living with a man who is not her husband. Before we cast her as an immoral woman, though, we must consider the strong possibility that each of her husbands had died, perhaps they were even brothers, each marrying her out of obligation as the brother before him died until finally, with no means of support, and her life on the line, she finds herself under the protection of a man who would not marry her – maybe even out of fear.
·         Unlike Nicodemus, this woman is not seeking anything, she is just going about her business. It is Jesus who surprises her, it is Jesus who speaks first and engages her.
·         Unlike Nicodemus, the woman has little to lose.
·         After the encounter with Jesus Nicodemus seems to keep a low profile. The woman’s response to this encounter with Jesus is to leave her bucket behind, and to go and tell. To go and tell everyone who would listen about this man – for, could it be, that he is the Messiah? 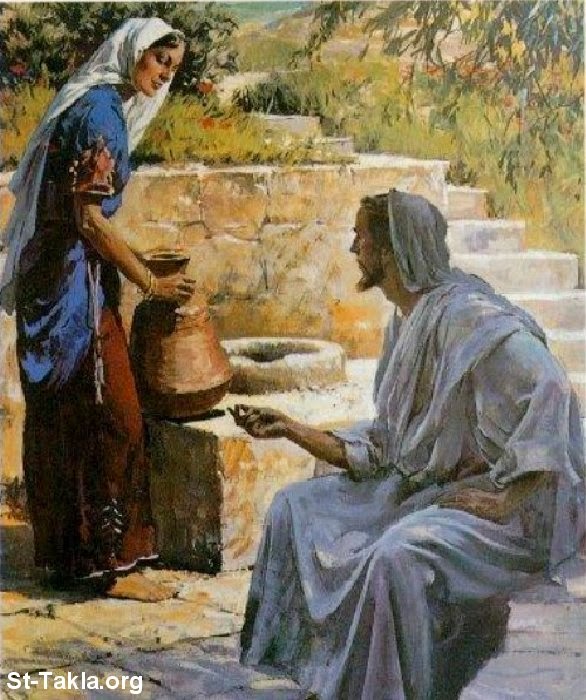 I wonder what it must have been like for this Samaritan woman, to have Jesus even speak to her at first, to acknowledge that she was there, and then as this conversation unfolds, to learn that Jesus knows everything there was to know about her – and chose to speak to her anyway. Jesus didn’t reject her. He didn’t turn his back on her. He didn’t demand anything from her. I wonder what ran through her mind as Jesus offered to quench her thirst.
Like Nicodemus, this woman initially interprets everything Jesus says literally. He offers to crawl back into his mother’s womb. She questions why Jesus doesn’t even have a bucket.
But with just a few words, Jesus opens her eyes. He gives her new understanding. He transforms her with hope. He reaches out to her in love. Jesus accepts her as a child of God, offering her something she never thought within reach. A Samaritan woman! An outcast! A person of no account, marginalized in every way possible.
In this surprising, confounding event, Jesus unplugs the dam of hopelessness and lets the living water of God’s love and care for this woman wash over her. She came to the well that day with her bucket, expecting to draws a days’ worth of life sustaining water. But as Jesus’ love enfolds her, she drops her bucket, the vessel that can never hold what it is that Jesus gives. She is offered life-giving water that comes from the divine “spring of water, gushing up to eternal life” - and she runs to tell her friends, her townspeople, anyone who will listen, that there is “something in the water” – the water that only Jesus can give.
While this woman came to the well with her own set of expectations for what life had to offer her, as she came to the well in the ordinary existence of her days, she came with only one purpose in mind. She thought she would draw water that day from the cistern at the base of the well. It would meet her physical needs. She would perform a chore that was expected of her.
But her encounter with Jesus is life-changing not only for her but for those whom she invites into the story. Her encounter with Jesus leads her to running, bubbling, life-giving, Spirit-filled water, water that is eternal, water that doesn’t dry up, water that overflows the cups we hold, water that cannot be contained, water that washes away sin and infuses us with God’s own life. With his words, Jesus transforms this woman of no account into a seeker who is suddenly thirsty for the life-saving word that he can give her. And he transforms her into a disciple – one who tells the story and invites others to hear it for themselves.
As he so often does, Jesus confounds expectations and dashes the status quo to smithereens – “the way things always are” or “have been” applies no longer. This woman of no account, this person of no status, this creature of no authority, is not only accepted but beloved; not only worthy but treasured. With the words “I am He,” Jesus identifies himself as the source of the living water she now seeks. The treasure offered here is the same treasure that is offered to all the world by this God who is determined to save us, determined to give us everything, determined to go to the cross in order to become for us the life-giving stream of life that never ends.
This story intersects our lives at the baptismal font. It beckons to us from the table. It leaps off the pages of scripture and invites us to be transformed as well. It invites our participation. It confers on us the status of God’s beloved, the ones who are washed in the waters of baptism and given equal status with this Samaritan woman, and with Nicodemus, and with those who have believed in Jesus and his claim, “I am he.”
This story and the promise of living water is for each and every person. If you have ever considered yourself unworthy, or been told that you are, this living water is for you. If you have been disappointed by life, betrayed by someone you trusted, felt less than worthy of love in any way, let the waters of from Jesus’ spring quench your thirst. If you have doubted, disbelieved, been bound by confusion or lack of faith, know that Christ holds this promise and this eternal gift for you.
This woman who had nothing – and everything – to lose – shared with others the good news of this life-giving words, this saving water, this promise of new life for all who come to drink. What are we then to do? We can do as this woman did.
The first thing the woman did was to tell her friends what her experience was. She didn’t try to convince them. She didn’t proselytize, she simply shared her story. She testified to what she had seen, what she had heard, how she had been loved, what that felt like. And others came. Samaritans, who had no affinity for a Jew let alone a rabbi, came to hear for themselves the life-saving word of God. In so doing they came to believe. 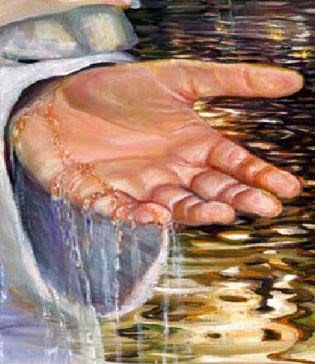 Each one of us is here because there is something in this unbelievable, counter-cultural, transformational story that has grabbed us. There is something about this Jesus of Nazareth that beckons to us. There is something that happened because of our baptism or something that is leading us to the font that we can’t even explain, but we know it is something worth clinging to and therefore it is something worth sharing with others. You don’t have to convince anyone of anything. Nor do you have to understand it. Simply testify to those you know that this word of God, this baptism and this meal mean something to you, make a difference in your life, and you need to share it with others. God will do the rest.
Like the Samaritans who came and asked Jesus to stay, who heard his word and were touched by his spirit, those we invite to this place will be transformed not by anything that we have done, but by everything that God has done through Jesus Christ.
Amen.


Posted by Wading Through Grace at 8:29 PM