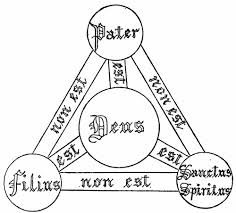 The assigned verses we read this morning reveal to us the deep desire of God to exist in relationship with all God has created, especially with humankind. As I thought about what I might say today as we turn our focus to God as Trinity, I of course considered how I could best describe the Trinity when the truth is, God’s workings and nature are in so many ways indescribable.

I guess, it should come as no surprise that I came up empty.

I mean, there are all kinds of cute little analogies that are often repeated whenever we attempt to define or explain the three-in-one, one-in-three nature of God, but of course, none of these quite cut it and we find ourselves asking, as Nicodemus once did, “How can these things be?”

The truth is that we always fall short when trying to define God or explain the reality of who God is and how God works, let alone when we attempt to tackle the complexity of God’s Trinitarian nature. It seems that there are some things that are simply too mysterious and infinitely astounding to pigeonhole, to fit into a box, or explain with human words. Human knowledge and language will always fall short, will always be inadequate, will always be unequal to the task of satisfying our longing to fully understand how the divinity can possibly exist in trinity.

Peculiar as it might seem there is something profoundly comforting for me in that. It seems to me that as much as I want to have a clear, concise, precise way to describe and explain God, the very nature of definition is that it sets limitations and boundaries on that which is being defined. 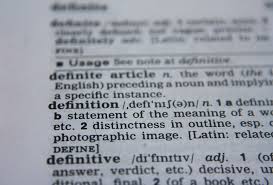 But who wants a God who is limited? We do not worship a God who observes boundaries, especially not boundaries drawn through our ideologies. Such a divinity would not be anyone’s idea of a God who meets the vast needs of the cosmos.  Nor is it a description of the holy one who creates, redeems, shapes and sanctifies us, who abides in this unique and wonderful relationship with us.

Instead, we belong to a God who is transcendent; different from anything that is or ever will be confined within our finite human experience or understanding. Try as we might, and many have tried – the reality is that our best attempts to explain the Trinity are simply a means to master with our words what is truly only God’s to know.

While some have rejected the very idea of a triune God because of the inability to precisely contain and explain the Three-in-One divinity, it is God’s deep desire to make God’s self intimately known which is reflected in the unique expression of a God who is perpetually relational, who goes to means as extreme as joining us in our humanity to bear this relationality out.

Nothing reveals this deep desire more than the incarnation of Jesus. And then, God leaves no stone unturned as God comes to us again and again repeatedly extending what God has promised: forgiveness, accompaniment and eternal love over, and over, and over again as grace upon grace.

At the reception following Confirmation last week, I had a lengthy conversation with one of our guests. He happened to be the grandfather of one of our confirmands, and from the perspective of quantum mechanics, he tried to describe a certain relative theory to me. To be fair, he did more than try. He explained it, and very well, I am sure –   it was me who was doing the trying - and failing - to understand what he was saying. Every now and then I had a glimmer of an inkling of an idea that a window might be opening and I was perhaps actually grasping a little bit of what he was saying, but then the curtain would come down, the light bulb would go out, and my head would start to hurt – it turns out I am no physicist, quantum theorist, engineer, or mathematician, my friends.

Then, after describing in great detail and with authority what scientists in his field have long understood to be absolutely true, my new friend looked at me and told me that lately, after reading about recent discoveries and current theory development he has come to firmly believe that our theories in this field are all wrong. He has come to believe that despite all the study and attention and development in his field over the past few decades, despite the mathematical certainty with which theories have been advanced, he is convinced - we really don’t know a thing.

Quantum mechanics aside - I kind of know what he means.

After a lifetime of reading and hearing the scriptures, at least enough to know many of the stories; after decades of going to church, and studying the foundations of our faith; after being involved in parish ministry in various capacities for decades, I had the bright idea to go to seminary. Well, truth be told, it wasn’t my idea, but that is another sermon for another day. Anyway, I went.

And, after taking classes like Biblical Greek, Old Testament, New Testament, Ancient and Medieval Christianity and the Gospels, all very early in my seminary career, I quickly reached the conclusion that all of my neatly drawn knowledge and determination about who God is and how God works was just wrong.

Despite my certainty that I had a solid foundation on which to begin my studies, the more I read and studied and learned, the more I realized I didn’t know a thing. I discovered my confidence and even my faith wavering because, if I couldn’t trust my intellect; if the facts and rules and laws I had learned and understood to be true about how God interacts with the world, if what I thought about these things was wrong, what in the world was I doing in seminary?

I have to tell you that my succeeding years in seminary, internship and subsequent study have only succeeded in confirming that while prayer and study and immersion in the scriptures is important, none of that is what really what matters. How can this be?
The thing about belonging to a relational God, is that, sooner or later we learn that God is more interested in the relationship than in what bits of knowledge we have amassed and may or may not possess. God is more interested in the relationship God has with each and every one of us – than in how well any of us understand this doctrine or that teaching of the church, or the law, or scholarship.

God is so interested and passionate about existing in eternal relationship with us, that God came to us, sealing our relationship in flesh and bone. God’s deep, gritty, amazing love for us comes to us through God’s all-encompassing drive and movement to save the world.
It is God’s activity in and through Christ that leads us to a new reality and experience of God’s love for the entire creation. God in relationship with us is constantly changing our perceptions, giving us new perspective, challenging our assumptions, shattering the boundaries we draw around our own ideas and theories, and drawing us into an ever deepening relationship and experience of God through the work of the Trinity – thus transforming us for daily discipleship.

This is the good news for today. It is our experience of God in holy relationship that informs our best understanding of who God, Father, Son, and Holy Spirit is.
All the rest – the mystery, the theories, the doctrine, the analogies, our every attempt to “explain” the trinity falls far, far short of the reality of who this God is, except as one who draws us all so deeply into relationship and gives us faith to keep us there. It is for the sake of love that God reaches out into the universe, claiming us each as heirs of the promise, heirs of the prize of God’s enormous gift and treasure of God’s love.

David Lose writes,
“Some say that’s why God created the cosmos and humanity in the first place, to have more people to love. But the Trinity goes even further, saying that from the very beginning of time the dynamic power of love that is at the heart of God’s identity and character can only be captured – and that dimly! – by thinking of the love that is shared…..And so God’s essential and core being has always been a giving and receiving and sharing of love that finally spills out into the whole of the universe and invites all of us into it. First through creation and God’s series of covenants, then and pre-eminently in the sending of God’s Son to demonstrate in word and deed just how much God loves us, and now as the Spirit, bears witness to God’s ongoing love for us and all creation.

Which means, I think, that when we talk about the Trinity as God being three-in-one, we really haven’t captured the heart of the doctrine and reality unless we recognize that God is three-in-one in order always to add one more – and that’s us, all of us, an infinite “plus one” through which God’s love is made complete in relationship with all of God’s children.
And that’s what these passages testify to – the profound love of God that draws us into relationship with God, with each other, and with the whole of creation and the cosmos.” 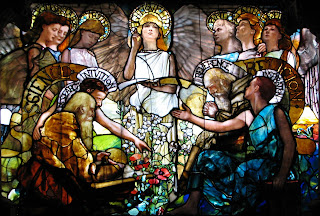 And so, yes, that big word, “relationship,” is again at the core of our message today. Today we embrace the fact that God in trinity – Father, Son and Holy Spirit is the relational power of God to reach out in love for us, for the sake of the world. Thanks be to God!

Posted by Wading Through Grace at 2:39 PM