We watched the re-runs at dinnertime when I was growing up. I can still hear the announcer’s voice, introducing the program: 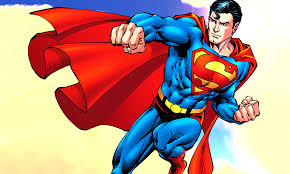 "Faster than a speeding bullet, more powerful than a locomotive, able to leap tall buildings in a single bound. It's Superman! Strange visitor from another planet, who came to earth with powers and abilities far beyond those of mortal men, and who, disguised as Clark Kent, mild-mannered reporter for a great metropolitan newspaper, fights a never-ending battle for truth, justice and the American Way."
Superman had all kinds of abilities and powers. Kryptonite was his major weakness, but unless some alien visitor brought some of that from his home planet of Krypton, Superman could save the day no matter how evil the bad guys or seemingly hopeless the situation.
In his book Hunting the Divine Fox, biblical scholar Robert Capon writes that the image of this heroic Superman is the perfect popular image for Jesus, too: meek, mild-mannered, humble and unassuming, with secret super-human abilities that give him power beyond anything we can imagine. An unassuming character in his own right, who bumbles around for 33 years doing good, and finally gets himself strung up and “done in on a Kryptonite Kross”.
But then, this Super-human Jesus “struggles into the phone booth of the Empty Tomb, changes into his Easter suit and, with a single bound, leaps back up into Planet Heaven.”
It may seem like a funny analogy, but before we laugh, think about it. Doesn’t this image of “Superman Jesus” align more closely to the long-awaited messiah, than the Jesus who did something as foolish as suffer and die on a cross?
Today is Christ the King Sunday: a day on which we remember and celebrate the fact that no matter what the future holds, no matter the powers of the world that claim supremacy… ultimately and eternally, Jesus is the ruler of the world who will one day draw all things to Himself. Jesus is the king who will one day return, bringing this imperfect and incomplete kingdom into perfect alignment with heaven.
Today is the day we as Christians declare that Jesus is our king, and that even today, he rules over our lives and that he is, was, and always will be the power of God to heal, unite, and save.
It’s no wonder, there are many in the world who would prefer the alien Superman to the vulnerable, human messiah as their Savior; because then they could understand him. Then they could get onboard worshiping him.
But here’s the thing: our vision of “king” has never aligned with God’s vision of the relationship God desires with and for us.
Back in about the 11th century Before Christ, the people of Israel looked around and saw that the nations around them had kings and they decided they wanted one, too. No longer did they want God to lead them, they wanted a victorious militaristic leader who would conquer lands and bring them wealth and prosperity beyond anything they could imagine.
God warned them that a king would demand everything of them, destroying them in the end, but still, they wanted a king. There followed a series of imperfect kings then some of them good and God-fearing, at least for awhile. But ultimately the kings abused the people, took everything from them and abandoned them. The kingdom was destroyed, the people were exiled, time and again they went from conquering force to subjugated conquered land.
Finally, God promises new life and salvation through a messiah that he will send, the anointed one who will usher in a new age of hope and redemption.
The people of Israel began to wait for the Messiah – who through the prophetic descriptions was expected to be a mighty Lord, Wonderful Counselor, and King of Kings. Strong and victorious, powerful and wise, the messiah would usher in the perfect kingdom of God.
Today, as we read through this Gospel from Luke, we might well assume that something has gone horribly wrong. On this Sunday when we declare the Reign of Christ and confess that he is our Lord, our God, our almighty King, the Messiah, we read of events that seemingly defy that reality.
Because today, as we celebrate the Reign of Christ our King, we do so with a reading of his crucifixion.
What is happening here? Why has the Church, in all its wisdom, paired this story with this day? If Christ is King, how does he manifest that reality hanging, suffocating, and suffering on the cross to die? And, how does this story serve as good news for you and me – and for the world?
The crucifixion is the paradox of our faith.
The glory of God is revealed in weakness. The power of God is displayed in the vulnerability of Jesus on the cross. The almighty grace of God is declared by a criminal, hanging and dying beside our Lord, the deservingly convicted man who recognizes the divinity of Jesus.
Where is the pomp and circumstance generally reserved for kings? Why does the cross serve as a throne for Our Lord? Where are the adoring, ecstatic crowds that surround royals, hoping to be noticed, hoping for a little glitz to fall their way?
Instead, as we proclaim Christ our King, in this crucifixion scene we have mockers spewing hate and words of derision and condemnation thrown his way, while he, between agonizing breaths, speaks a word of blessing and promise to someone even less fortunate than he.
God is about to change the entire trajectory of the world in the contradiction that is at the heart of our faith. This is the paradox of the kingship of Christ. Jesus, crucified on the cross is Good News for the world, because at the cross, power is laid down. Life is given in order to save a broken, hungering, thirsting world.
Through the cross of Jesus, majesty is displayed not in a show of power or in the might of the sword, nor in shining jewels and hordes of earthly wealth, but in Jesus’ abiding love. 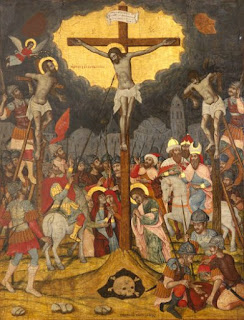 Note that as the Son of God dies on the cross, he remains in character—
-         noticing and reaching out to serve the marginalized
-         he sees those whom others ignore or cast aside
-         he offers hope, delivers love, and promises a place in his kingdom to a sinner.
God reaches down and grants new life to the hopeless.
Jesus dies on the cross but three days later the Empty Tomb stands open.
In Jesus Christ, God enters our story in a profound new way. God enters our suffering and gives us true hope. The real power of Christ is his willingness to endure the same suffering we ourselves experience and endure, and through his death and resurrection to reveal that sin, suffering, evil, and even death itself will not have the final word. Instead, by God’s grace, life in Christ is the final determinant.
God is here claiming each one of us through baptism. In this time and place, as part of a world often marked by greed, selfishness, bitter conflict, and blatant disregard of the value of human life and God’s creation, what does it mean to honor Christ as our King? What does the cross of Jesus mean as we live out our lives as part of this broken world?”
Through the cross of Jesus, God answers this question as God shapes our lives. To live in the Reign of Christ, then, means to have humility, and to surrender, serve, offer sacrificial love and expansive mercy to the least, the last, the lost, the lifeless, and the longing ones in our world.
Superman had a lot of Jesus-like qualities. His strength was not on display when Clark’s coworkers were mocking him or teasing him. He didn’t break out the suit whenever he wanted to be noticed or to enrich himself. He didn’t use his powers to humiliate or subjugate his detractors. He became Superman when someone else was in danger, when lives were at risk, when the powers of evil swirled a little too closely to the vulnerable and helpless ones around him.
The path of glory for Jesus wasn’t in saving himself, it is in saving us. Jesus never performed a miracle to secure his own comfort or prosperity, and he illustrated absolutely no patience or tolerance for those who were contemptuous of those who needed assistance. Even his final prayer spoke of who Jesus is and what he does, “Father, forgive them, for they know not what they are doing.”
As Jesus does for those who persecute him, as he does for the dying criminal, Jesus does for us. In his forgiveness of us, he has already brought us a taste of the heavenly kingdom, thereby freeing us to worship him and to go and do likewise for those with us in the world.
Brian Stoffregen writes, “Perhaps, at the end of the day, many of us would be would be happier and feel more justified with a powerful King who got even with his enemies, rather than forgive them -- because that's what we want to do -- and we want Jesus to help us do it. But, celebrating Christ as king, means believing in his kingly power when he is on the cross and unwilling to save himself. It is letting this belief make a difference in our lives, especially when it comes to how we relate to "enemies" even when the enemy is us.”
Amen.

Posted by Wading Through Grace at 1:31 PM