Mission Impossible: Only By the Grace of God

It all started when God asked Jonah to bring a message to the people of Nineveh about how their wickedness would be their downfall. Jonah is uninterested in this task.

Being God’s prophet is not for the faint of heart, but Nineveh is a particularly hard assignment. Located in Assyria, it is the land of Jonah’s worst enemies – Jonah understandably hates them for all the death and destruction they have caused his people. But God desires this people to be saved, and so God sends Jonah to herald the coming destruction if they don’t repent.

Man, what could go wrong in that scenario?  Jonah could be captured, tortured, and who knows what else? Besides, why would Jonah want to be any part of their salvation? We can completely understand Jonah’s next move – to get as far away from this mission as he possibly can. He hops a boat in Joppa that is headed to Tarshish, literally the opposite direction from Nineveh.

Perhaps we can all understand Jonah’s reluctance, maybe we can even think of times when God has desired one thing from us, but we were reluctant and ignored God’s call, even sometimes going in the exact opposite direction.

There is a reason it took me twenty years to answer the call to ordained ministry; I’ve experienced this hesitancy, this inability to embrace God’s call because it wasn’t my choice, because I couldn’t see the sense of it, didn’t feel equipped for it, didn’t trust God enough to know that when God calls us to something, God never leaves us alone in it. Sometimes what God asks of us seems too hard, too inconvenient, too uncomfortable.

Sometimes God calls us to things we flat out don’t want to do, or don’t think we can do. Such was the case with Jonah.

I doubt there is anyone among us who is always more like Simon, Andrew, or the sons of Zebedee, who, when it comes to responding to God’s call, “immediately” drop everything and follow Jesus.

Most of us take time to weigh the consequences of big decisions. We research the pros and cons. We count the cost, because, my friends, there is always a cost to discipleship. Indeed, most of us are a lot more like Jonah – going in exactly the opposite direction when God’s demands seem too hard.

Jonah’s denial of God lands him on a boat headed in the exactly the opposite direction of where God wants him to be; a storm arises, and yes,  Jonah ends up in the drink, and then in the belly of a huge fish, and then unceremoniously vomited out onto the beach in a pile of stink, very close to the place he started out. That is when God’s voice comes to him again, calling him to proclaim this message God has given him to deliver – to his enemy.

In today’s vernacular, I can imagine Jonah’s initial response – “What the heck? Really? Are you kidding me?”  I can also think of a few other, choice words he might have said. Finally, however, reluctantly, begrudgingly, Jonah gets up and sets out for Nineveh. 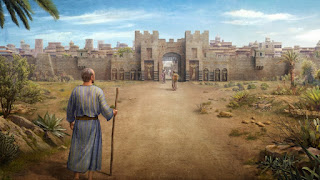 A day’s walk into the city, he reluctantly, begrudgingly, begins to deliver God’s message of warning to the city.

Picture a reluctant, recalcitrant 7 year old, when you demand he apologizes to his sister for some misdeed. It is the last thing he wants to do, but do it he must, so he performs the deed with as little enthusiasm and sincerity as possible.

I picture Jonah’s proclamation being a lot like that: “Forty days more, and Nineveh will be overthrown!” But then, an amazing thing happens, and Jonah’s short, half-hearted warning works!

It goes viral through the city, even making its way to the king. And this whole city of enemy agents repents! They actually listen to the message! They turn from their evil ways, and God (who must have known all along this would happen, like any wise parent would), decides not to destroy them after all. All is well, right?

For the Ninevites, yes, but not so much for poor Jonah. This was one instance where he was hoping for failure, not success. Remember, he hates the Ninevites! In his mind, the one bright spot about being in that blighted city, was that surely he would have the chance to see his enemies destroyed, like they deserved. But then God “changes his mind”??

It is incredibly unfair and unexpected, and Jonah is mad; if you read on from here, then you know that Jonah goes off to pout. God, after all, should hate all the people whom he hates, who are really worth hating, by the way.

Jonah’s story, as ridiculous as it may seem, serves as a mirror to help us see our own humanity, a mirror that is especially hard to look in to. Jonah does not like that God showed grace to people Jonah despised. Jonah gets angry at God for being gracious and merciful, slow to anger and abounding in steadfast love – for them.

While Jonah feels grateful for the grace that God has shown him for his short-comings, he has an incredibly hard time accepting that God might be so gracious and merciful that even the nasty Ninevites could be forgiven and saved.

It can be hard to swallow when good things happen to bad people – or at least to the people for whom we hold little regard and plenty of animosity.

It is hard to accept that God could be so gracious as to love and forgive even the people we find unlovable and unforgivable, the Ninevites in our own lives:  those who have done us wrong; bullies, estranged family members, former spouses or exes, those nasty Republicans; those awful Democrats; our ne’er-do-well neighbors, the blighted immigrants, refugees, those MAGA people, the BLM people, the liberals, the conservatives – or whomever falls into that camp for you.

It is at times hard to swallow that God would bestow God’s love and forgiveness and favor on those we have deemed unworthy.

It is even harder to swallow that God would use us, call us out of our comfortable existence, to bear the cost of discipleship so that God’s grace and love might be known through us to the enemy or the stranger. While it is comforting to know that God has sent Jesus to redeem us from our sins, it is not comforting to know that God has also called us to get out of our comfort zones and share the gospel love of God known through Jesus Christ, with others, especially those we long to ignore or keep in their society-determined places.

But through the redemption of Jesus, this is exactly how God operates, and it is the best news we could hope for – because if God’s grace is big enough for all that, then it is big enough for you, and for me. It is big enough to see through our failures, our smallness, our insecurities and culpabilities.

The good news is, there is nothing, nothing that is too difficult for God’s grace to conquer.

In the Gospel story today, we hear Jesus call people to follow him, to “fish for people.” Simon, Andrew, James and John are called to leave behind the comforts and familiarity of the lives they have built, of the relationships they cherish, and to go into uncharted waters with Jesus.

Unlike Jonah, the four disciples he calls that day follow him “immediately.” They didn’t stop to Google “discipleship” or “fishers of men” to see what this path would entail. Jesus called and they answered.

How good are we at “knowing” that?

This week, we turned a new page in the story of our nation with the inauguration of a new president and swearing in of a new and historic vice president. We heard a call for healing, not only from those figureheads, but from the words of scripture read and the words of prayers prayed at the ceremonies on Wednesday.

The God called upon for the healing of our nation is the one God whom we adore. Jesus calls us to be justice-bearers and peace-makers and we know that as followers of Jesus this is a life-long call and challenge, regardless of what is happening in the world around us. Yet, as the recipients of God’s generosity and mercy, we are the recipients of godly grace each and every day. And it is time to share the self-same goodness with all we meet.

Jesus never calls us to anything the God does not prepare us for. In sending Jesus Christ into the world our God sought to save the world, to build a kingdom of people who forgive, love, and build bridges and God forgives, loves, and builds bridges. We are part of that movement.

As we follow along in the gospel of Mark this year, we will see how unsteady the walk of these first disciples could be. The scriptures witness to their failures. Followers of Jesus sometimes stumble in their blindness to who it is that stands before them and what his words and his call to them mean.

Disciples aren’t perfect, they are forgiven. They don’t always succeed in what Jesus tells them to do, but they are pardoned for their failures and strengthened to continue.

Posted by Wading Through Grace at 10:51 AM