This liturgical season of Epiphany is a time in our worship when we hear about light overcoming dark and about God’s presence, power, light, and love embodied in Jesus for the sake of the world.

Today’s Scriptures are full of the play between dark and light and the truth that is revealed when we are surrounded by and live in these God-generated, life-bestowing elements. The gift of sight and the importance of seeing God, seeing the truth, seeing Jesus for who he is and what he has done, is doing, and will do are threads that run through and connect our lessons today.

We begin with the Hebrew story of Eli, the old priest whose sight has dimmed, whose world has grown increasingly dark. The Scriptures tell us that “the word of the LORD was rare in those days; visions were not widespread.” It is at such times that the people of God have often felt abandoned by God or have felt the weight of sin-created estrangement from God – both the sin of the world, and our own personal wrestling with sin.

Some of us are all too acquainted with the experience of the kind of alienating darkness of which I speak. Perhaps you have lived through such dark times or are experiencing them in your personal life right now; perhaps you know someone else who abides in that kind of darkness, through illness, addiction, broken relationships, personal estrangement, or mental illness, and you are helpless to lift them out of it.

When we endure times of pain and loss, of isolation and fear, we often equate our experiences with darkness. This pandemic, the world events of the recent past, and the events that are taking place in our nation right now may feel like such a time, regardless of the “side of the aisle” we stand on. What are we to do in such times? Let’s look at our Scriptures to see what light they can shine on us.

It is in Eli’s story that we meet the boy Samuel. He is young, far away from his family, because they dedicated him to the Temple when he was but a toddler. He sees his parents once a year when they come to the Temple to offer sacrifices. This was not an uncommon practice in that day: it was a show of dedication to the LORD. 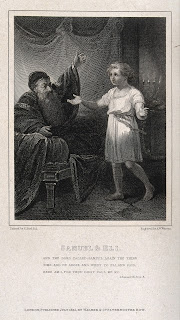 Samuel serves God by serving Eli, an old priest. Eli’s sons are also priests, but they are abusing the sacrificial system to put aside wealth for themselves. Eli tries to bring his sons back into line, but they refuse to listen to him. The darkness in Eli’s life comes from the fact that his eyes grow dim, and perhaps even more from the fact that he has lost authority over his sons and therefore over the people in their charge.

It is a time of darkness for Israel. With corrupt priests and the corruption of the people evident all around, the silence of God has grown deafening.

But into that time of darkness, the Word of God suddenly comes during the night as we heard in our first reading: God calls to the young boy, Samuel, three times, and three times Samuel reports to Eli, who says he didn’t call him; until finally, the “light” dawns for Eli and he tells young Samuel what to do.

Obediently, Samuel goes back to bed, and when the voice comes again, “Samuel! Samuel!” Samuel says, “Speak, for your servant is listening!”

And the voice says:

“See, I am about to do something that will make the ears of everyone who hears it tingle.”

In the darkness, God told Samuel to see, and then, God showed Samuel that God had seen; God had seen the troubles of God’s people and would respond to their pain. And indeed, God responded to their plight. Because the thing is, God can see in the dark, even when we can’t, even when we believe that is no way out of our deepest, darkest fear and danger. At those times God still holds God’s fearful and wonderful vision, and God steadfastly holds us within it.

Have you noticed how often the word “see” turns up in today’s readings? “See,” God invites Samuel when God gives him the prophecy that would begin Israel’s renewal. In our gospel, it is Philip who says to Nathanael, “Come and see.” It is both an invitation and a command. “You will see greater things than this,” Jesus promises his new disciple.

See. God is always inviting us to see beyond the darkness, even and most especially when we can’t do so on our own. It is often only in the sight of God’s holy light that we can see and abide in the hope and promise of light that overcomes darkness.

When Philip sees his friend sitting in the shade, in the darkness offered by the leaves of the fig tree, he beckons him to come and see Jesus, the one “about whom Moses in the law and the prophets wrote, Jesus, son of Joseph from Nazareth.”

No one really knows the importance or symbolism represented by the fig tree, if there is any. A tree of this size might be a place where a man would sit and pray and ponder. A place perhaps where Nathanael was praying for the coming and revelation of the messiah. We simply don’t know. What the text tells us is that despite his doubts over the importance of meeting the one who “comes from Nazareth” – that po-dunk, insignificant place, once he meets Jesus, sees Jesus, and learns that he is seen by Jesus even in the dark shade of the fig tree, Nathanael makes the rare exclamation, “Rabbi, you are the Son of God! You are the King of Israel!”

It is easy to dwell in doubt when abiding in the darkness and shade of world events, personal tragedy, or a world so vastly changed and lives so prolongingly altered.

“Seeing, of course, is always selective,” writes Debie Thomas.  “We have choices when it comes to what we see, what we prioritize, what we name, and what we call out in each other.  The selves we present to the world are layered and messy, and it takes both love and patience to sift through those layers and find what lies at the core of who we each are.  But there is great power in that sifting, too.  Something healing, something holy, something life-changing happens to us when we are deeply seen, known, named, and accepted.”

Those of us who have been seen and claimed by Jesus Christ and seen him in return, continue to live in the light despite the troubled world that inserts its doubt, its trickery, and its dissent into the atmosphere surrounding us.

The unrest within our world that we witnessed a week and a half ago and that many fear will rise again this week as we move closer to the inauguration is a movement that uses smoke and mirrors, trickery and lies to convince us that God is silent or that God speaks through violence, insurrection, false claims of Jesus’ blessing on chaos and upheaval.

But of course this isn’t true. Within that crowd were individuals whose actions spoke louder than words – individuals wearing Christian insignia but who used the poles of their banners and flags that read, “Jesus Saves” and “Make America Godly Again” to batter and beat those charged with protecting our elected leaders, even to the point of death. False prophets. Darkness-bearers. Liars and thieves. 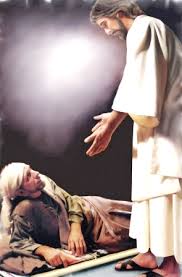 As Christians, we confess our belief in a God who never stops speaking to us.  A God who so longs to reveal God’s self in love, mercy, healing, and hope that he becomes incarnate in the person of Jesus Christ, the messiah. To use Nathanael’s proclamation of who he sees as Jesus stands in front of him, “the Son of God, and King of Israel.” And not only Israel, but as we have confessed over and over again, King of our lives and of our world.

We know that God’s capacity to restore and resurrect has no limits.  There is no place, time, circumstance, or situation that is beyond God’s ability to redeem.

In our world, the darkness can be deep. But a Light shines in the darkness, by whom we can see that God’s vision continues to unfold. And it unfolds, not in the places we think we ought to look for it—in thrones and crowns, in wealth and power, and physical strength and glory—but in voices in the night, and under the shade of a fig tree, and among the poor and the hungry, the abused and depressed, the homeless and vulnerable and marginalized. The people walking in darkness.

God issues an invitation to follow: Come and See. The invitation consists not of promises or proclamations or proofs or deeds of power, but in the light-bearing gifts of the revelation of Jesus Christ, the messiah, our redeemer, Our King. Come and see. Amen.
Posted by Wading Through Grace at 10:36 AM