It was a day like any other. She went to collect the water needed for cooking and drinking and cleaning. Like any other woman in the town of Sychar, she walked to the well known as Jacob’s Fountain or Jacob’s Well, the deep, reliable source of water for the town since the time of the patriarch, Jacob.

Unlike the other women in the town, however, she went to fetch the water for the needs of her household not during the cool morning hours of early morning, but during the scorching heat of the day.

As she approaches the well, eager to draw the water to fill her jug and then return to the cool interior of her home, she sees a stranger sitting by the well. An obvious sojourner, the lone man looks tired, and wears the dust from the road upon which he has traveled.

She is surprised to see him there, alone, in the sun, and even more surprised when he speaks to her, inviting dialogue with her, a woman and a stranger. But that is not the only unusual thing about his addressing her – for not only is she a woman, but she is of a different race than he. For he, clearly, is not a Samaritan.

As she hears his manner of speaking, she pegs him for a Judean, and a Jew at that.

“Give me a drink,” he says to her, vulnerable to her in his thirst, in need of her mercy.

She stares at him for a long moment. “How is it that you, a Jew, ask a drink of me, a woman of Samaria?” 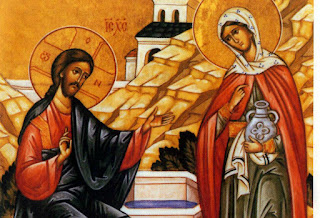 By way of a little background here, we remember that there is deep animosity between the People of Israel who are Jews living Judea and the Samaritans. To be sure, the two groups believe in the same God and they read from the same five books of Scripture, but they disagree on where God should be worshiped.

Additionally, while there is a prohibition inscribed in the Law and recorded in Deuteronomy, that there should not be intermarriage among Jews, although the Talmud mentions specific nations under the ban. The danger to avoid is one of drawing the faithful away from the LORD God of Israel - for foreign people bring with them foreign gods and the temptation to fall into false worship. The problem for the people of Samaria, was that under heavy colonization by Assyrian rule, Samaritans had intermarried over several generations.

They were considered mixed-breeds or half-breeds, looked down upon by their orthodox Jewish cousins. In the eyes of those who worshiped in Jerusalem, they were the real Jews; they were the real chosen people. They alone had remained pure and therefore, they alone were righteous and worthy of God’s love and promise. Samaritans were scum in their eyes, not really Jews, and certainly not worthy of God’s notice, with their impure bloodlines and corrupt worship practices.

Yet here, Jesus, a Jew, is requesting water from this half-breed, Samaritan woman!

The giver of living water asks her for a water to quench his parched throat and mouth, thus placing himself in a position of need before her, thus unraveling so many barriers that exist between these people.

He crosses gender boundaries, unraveling patriarchal exclusions deeply embedded in the culture. He does this not simply by asking the Samaritan woman for a drink of cool, fresh water, but by engaging in her as a valid conversation partner and even entering into theological discussion with her.

A sign of respect in Jewish tradition is for a rabbi to engage in thoughtful debate and conversation about the meaning of the Scriptures and the character and will of God with a student or another Jew. This rabbi enters into just this kind of respectful conversation with this woman, this Samaritan. By so doing, Jesus yet again unravels deeply held exclusionary patterns of behavior. 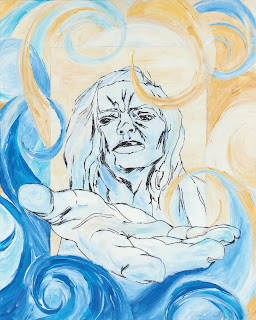 As the conversation unfolds, Jesus reveals that he knows much about the woman. At this point it would be helpful if we unravel some of the traditional assumptions that have been made about this woman.

The first and perhaps most common assumption is that the source of her shame is her lascivious lifestyle. After all, she with her having had 5 husbands and now living with a man who is not her husband, her morals must be at fault, right? While that might be the case, It is  perhaps more likely, that the reference to her marital situation finds its truth in the practice of levirate marriage, where a man’s brother would be obligated to marry his brother’s widow. If indeed this family had been unlucky enough to lose five brothers to premature death with this woman married to each one, perhaps the sixth wisely refused to marry her, but takers her into his home and supports her as he is obliged to do.

Another real possibility is that Jesus’ reference to her five husband refers not her literal marital state, but to the five nations whose citizens were brought in by the Assyrians to colonize the region when they conquered it in 721 BCE, creating a situation where intermarriage became common. \

Herod the Great then settled thousand more foreigners in Samaria during his reign, thus increasing the problem; Jesus may have been addressing the realities of political and religious situations that separated “authentic Jews” and Samaritans, rather than this particular woman’s personal life.

In this case, Jesus in this interaction with the Samaritan woman, and John in retelling the story for his community, were unraveling historic barriers of race and cult in the work that God is doing in the world, through his Son.

Another source of unraveling comes from Jesus choosing this woman for discipleship. Jesus is traveling with his disciples. They are members of the group to which Jesus relates both ethnically and religiously. But here in John’s gospel, it is not to these that Jesus first reveals his identity. Rather, this Samaritan woman, this outcast of her society and outcast to Jews is the first to whom Jesus makes the claim, “I am he.”

She is the first disciple, in fact, to go back to her people to share what she has learned. In the verses just after these, however, we learn that so astonished and excited was she, that she left her water jug behind – the conveyor

Instead of water from the well, the source of life that she brings to her people is the truth about who Jesus really is, and how the Savior has come among them. They, receiving her story, Samaritans all, then become true believers, among the first to make the claim of the divinity of Jesus. The astonishing result of Jesus’ encounter with the Samaritan woman is the sharing of the Good News not just outside of Judea, but among those previously considered enemies.

The theme of our worship continuing into this month is “Unraveling” and my friends, this story is full of the kind of unraveling that happens through Jesus Christ.

Barriers are unraveled and broken down.

Structures of power unraveled are overturned.

Traditions are unraveled and reformed.

Age-old assumptions and prejudices are unraveled and fall apart.

Suspicion is unraveled and Faith is transmitted.

Judgement and shame are unraveled and forgiveness is granted.

Living water quenches the thirst of those in need of healing, awakening, and new life.

All the Samaritan woman needed was a little bit of Jesus to break down the walls of shame, of exclusion, of separation, of cultic tradition and boundaries.

All we need is a little bit of Jesus to unravel the shame in our lives, the walls in our culture, the barriers between people and groups of people.

We read over and over again, how Jesus unravels our misconceptions, if only we will follow his lead. 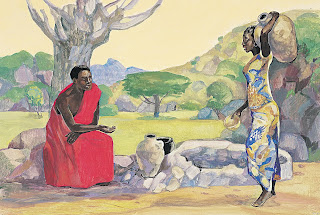 Through Jesus, God calls us to a great unraveling of preconceived notions about people, about who’s in and who’s out, who is worthy of notice and respect and who is outcast and unimportant.

We live in a world where bullying is not only common but is applauded, where people live in fear of allowing their children out of their homes because they might easily be victimized because of the color of their skin, the accent of their speech, their country of origin, their religion, gender identification, politics, or any number of other markers.

So many theories exist about who the Samaritan woman was and why she was outcast, why she had had so many husbands, and she is judged even by us, even today, despite the fact that we know that in this story, Jesus unravels all of that and turns those conceptions on their head! We do this with a woman in a story that is 2,000 years old!

The rhetoric that is broadcast in media either in print or on the airwaves supremely demonstrates the toxic assumptions and interactions that took place between peoples. On social media, on the street and almost everywhere you go, people treat one another with disdain and distrust. Common courtesy and mutually respectful debates on important issues are entirely absent. What are we teaching our children?

What is Jesus teaching us, and them, through the unraveling that takes place in Sychar, Samaria all those years ago?

The Samaritan woman needed Jesus. We need Jesus. And Jesus unravels the shame, the separation, the sin, and the differences between us.

As Jesus breaks down so many walls and unravels so many biases and barriers in this story, Jesus does the same for us today. If only we have ears to hear him, and hearts open to receive him. May it be so.

Posted by Wading Through Grace at 3:38 PM